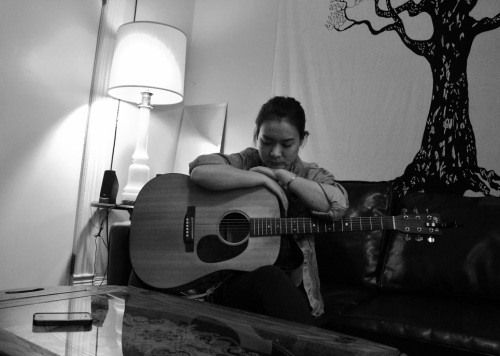 Over the past handful of days, several notable music videos have found release. Yoni & Geti (who almost claimed this post’s featured spot thanks to the editing alone), Band of Horses, Mumblr, Dead Stars, Fear of Men, Gemma Ray, Nicholas Allbrook, Atoms and Void, Somos, Cate Le Bon, Omni, Thin Lips, Braids, and The Good Life Ben Seretan, all had clips deserving of multiple looks and Steve Gunn offered up an endearing lyric video. There was even a Henry Rollins-starring trailer for a new Dinosaur Jr record. Ultimately, it was the latest clip from Mitski that earned this post’s feature.

Following the unforgettable “Your Best American Girl” clip would’ve been a daunting task for any artist (or filmmaker) but “Happy” accomplishes it with astonishing ease. Directed by the inimitable Maegan Houang — whose work has been praised on this site before and likely will again — “Happy” creates a challenging narrative that touches on everything from personal intimacy to self-doubt to self-loathing to gender politics and race relations (among others).

Exquisitely shot and paced, the story unfolds delicately, revealing a growing wound between a woman and her military husband. Suspicions are confirmed and the wound grows deeper, creating a tightly-wound level of tension that’s only drawn tighter as the clip progresses. Fueling the atmosphere is Houang’s assured direction, giving nods to legendary filmmakers like Wong Kar-wai and Alfred Hitchcock along the way, layering on the cues to subtly underscore the passage of time.

Everything in “Happy” feels like it’s heading towards some climactic moment, a confrontation that exists on a purely personal basis. While that climactic moment does arrive, “Happy” manages to successfully subvert those expectations while remaining true to the heart of the video. At first blush, the final sequence may not seem overtly personal but dig deep enough and it becomes heartbreaking in its symbolism.

Those final moments are full of untold tragedy, harsh reality, and keen awareness. It’s terrifying and confrontational all at once, full of a well-placed rage that imbues the entire affair with a passion that retroactively alters every one of the clip’s preceding vignettes. One of the most satisfying narrative presentations the format’s had in recent memory, “Happy” winds up being more than masterful; it’s legitimately memorable. Easily one of 2016’s finest clips, “Happy” demonstrates Mitski’s taste and convictions in equal measure, ultimately culminating in one of the artist’s finest offerings to date.