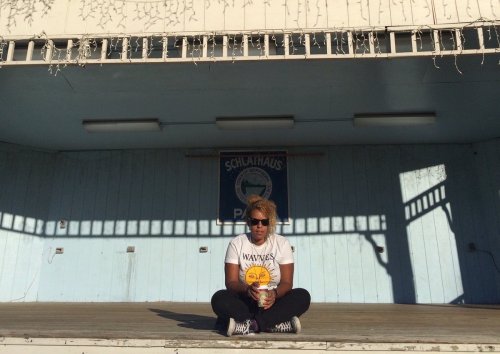 There were very few songs released over the past year that hit as hard as Oceanator’s breathtaking “Nowhere Nothing“, which not only served as an extremely formidable introductory piece for the project but bludgeoned its way into this site’s 50 Best Songs of 2016’s First Quarter list. Now, the project — masterminded by Vagabon drummer Elise Okusami — is following up that first glimpse with another meaningful look.

“Sunrise” is the latest Oceanator track and it trades out the relentlessly dark brooding of “Nowhere Nothing” for a warmth that feels true to its title. That warmth isn’t just present in the tones of the driving bass, surf guitar, or synths that define the song’s carefree approach, its also evidenced by the lyric set. In one song, Oceanator veers sharply away from the introspective damage that made “Nowhere Nothing” such a hair-raising experience to focus on something a little less miserable; romantic yearning.

Framed by a simple desire to have someone to share in some warm weather experiences, “Sunrise” succeeds as a narrative by managing to get its point across in broad strokes while putting an acute point on personal tendencies. The bouncy, breezy instrumental approach distracts from the inherent loneliness that drives the subtext of “Sunrise” and keeps the song in a place that’s much more immediate, allowing it to breathe and enhancing the carefree nature of its surface.

In two songs, Oceanator proves to be a project with a surprising amount of range, depth, understanding, and versatility. Equally successful on two very opposite side of the spectrum, “Nowhere Nothing” and “Sunrise” offer up a very clear indication that this project could very well bloom into a serious vehicle that attains an impressive level of name recognition and praise.

“Sunrise” isn’t just ancillary, though, it’s also an impressive song in its own right and its an essential addition to any summer soundtrack. Any way it’s spun, it’s a song that demands to be heard and refuses to live by any rules other than its own. Keep an eye on Oceanator, with a track record this strong at such an early stage, whatever’s waiting around the corner is worthy of a tremendous level of anxious anticipation. “Sunrise” will be more-than-welcome company as Oceanator constructs its next step.