The past week saw a lot of great live videos swimming to the shore from the depths of nowhere. There were outstanding featured performances in those clips from Adir L.C., The Curls, Lydia Loveless, Courtney Barnett, Ultimate Painting, Dogbreth, Los Blenders, Kinda Rad Kinda Sad, Summer Twins, Rich Girls, Slingshot Dakota, The Staves, Caveman, Eric Bachmann, Brendan Canning, Lisa Prank, Vetiver, Paridisia, Porches, Mimes of Wine, SALES, Typesetter, and Julien Baker. For the 136th installment of this series, the attention turns to a handful of folk-influenced artists who are either making their mark or reaping what they’ve sown throughout their careers. So, as always, sit back, adjust the settings, take a breath, and Watch This.

Margaret Glaspy‘s had a deeply impressive 2016. The young songwriter released a breakthrough record, continuously boasts one of the better live shows on the market, and has handled the transition into the public eye with the poised confidence of a seasoned veteran. Here, Glaspy gives Colorado Public Radio’s OpenAir a powerful look at that live show, landing a few knockout punches throughout a rousing four-song performance.

No band has been written about or praised more by this site than Tenement, who have been the consummate example of what this site was built around supporting. Through that band’s decade-long existence, bandleader Amos Pitsch has been involved in a number of other projects but something about Dusk feels just a little bit different. The band’s comprised of several of the most impressive musical figures in Wisconsin’s relatively isolated Fox Valley area, whose singular visions act in complementary tandem. Beautiful harmonies, a sense of history, and a tenacious commitment help define the band’s identity. All of those traits are on full display for this gorgeous two-song turn-in for Wisconsin Public Radio’s excellent Set List series.

Ever since the release of 2014’s excellent Rich Man, Poor Man, Green Dreams have been relatively quiet. All of that’s about to change as the band preps a new release, which the band provided a tantalizing glimpse at through the form of this live acoustic video. The typically ferocious project reveals their pensive side on the lilting “Don’t Pray For Me”, while still retaining the overwhelming narrative darkness that’s been so prominent in their past releases. Beautifully lensed and delicately performed, the video’s a powerful reminder of Green Dreams’ numerous gifts.

For more than three years, Bernie & the Wolf have quietly been perfecting a mix of influences and forming a sound that’s not too distant from the best of Saddle Creek’s offerings. Open, sprawling, and teeming with distinctly American influences (and history), their songs are immediately warmly familiar and entirely winsome. DZ Records recently capture the band delivering an impassioned set, keying in on “Ethyl”, “Catch Some”, and “Pretty On Me”, three genuine standouts from what promises to be one of the best releases of its given year.

Typically, these spots are reserved for unheralded artists, independent-leaning moments, and videos where the performers aren’t hundreds of feet away. It takes a lot to overturn any of those qualifications and overturning all of them is essentially unprecedented. Even though Bon Iver’s Eaux Claires live unveiling of the forthcoming record — something I was fortunate enough to attend — was a genuinely Big Moment that will be exhaustively covered by nearly every serious music publication, the way it was introduced felt intrinsically connected to the foundations of this site.

As a person who’s lived the vast majority of life in a small Wisconsin town, watching someone like Justin Vernon selflessly elevate an enitre artistic community has been heartening. Watching him debut an entire album live, in front of a hushed audience of thousands, at a genre-balanced festival he founded in his own small Wisconsin hometown was actively inspiring. While Vernon’s rollout campaign for Bon Iver’s forthcoming 22, A Million was designed to benefit the projects’s chosen slot, it was also an effort to highlight the other artists (like Tenement and Tickle Torture) who were a part of the Eaux Claires festival.

In that methodology, Vernon’s added another heartfelt notch in his continuing efforts to expand Wisconsin’s woefully underrated music community by any means at his disposal. On top of all of that, though, the actual performance of 22, A Million was an unforgettable event that was enhanced by the location (Bon Iver’s music has always been perfectly suited to Wisconsin’s wilderness) and the weather.

Just before the set began, what had been a steady downpour of rain lasting hours had suddenly stopped and night had fully descended. Throughout the set, there was an eerie calm that was punctuated by the noise of crickets that had taken residence in and outside of the festival grounds, creating an ambient wellspring of noise that further enhanced the glitchy electronics that permeate throughout 22, A Million (they became especially evident during the quietest moments, rounding out those songs in an unforgettable fashion).

While all of the main set can be heard and seen below in a video that SPIN livestreamed from the crowd, the encore set (which isn’t part of the video) provided what may have been the most defining moment of the festival.

Playing a selection of songs that wildly varied from their original versions, the band pulled out a fairly faithful rendition of “Creature Fear” that culminated in an apocalyptic wall of noise outro section. In the lead-up to those breathtaking final moments, a blisteringly intense lightning storm had erupted behind a heavy cloud, providing an unexpected assist that felt entirely in tune with the weekend’s joyous collaborative efforts. In that moment, the audience, the band, the city of Eau Claire, and Wisconsin itself became part of a unified moment that transcended easy category, leaving an indelible mark on Eau Claires, on Eaux Claires, and on everyone who took a moment to take in their surroundings.

The Honorable Mentions of the 2015 Music Categories 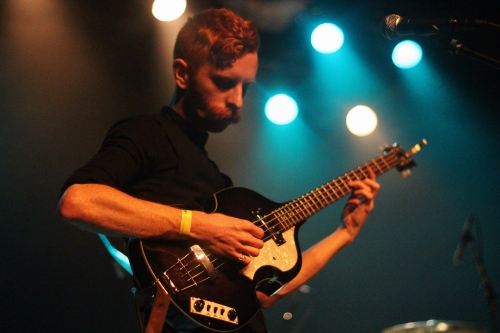 Before diving into the particulars of the forthcoming lists, it’s worth addressing the distinction made in the headline. Each of the categories that received a list in 2015 (music videos, songs, EP’s, albums, odds and ends) will be expanded upon in this post. However, there are still two forthcoming film lists but each of those will include the honorable mentions along with the featured rankings. An obscene amount of great material came out over the 12 months that comprised the past year so any attempts to cover everything would be futile. If anyone’s exhausted the below lists, a more comprehensive version can be found by exploring the following tags: stream, full stream, EP stream, and music video. Explore some of the top tier picks that didn’t make it onto the year-end lists via the tags below.

When I first saw Adir Cohen, who goes under the moniker Adir L.C., it was immediately evident that he carried an easy magnetism. There was a quiet confidence in his posture and it was clear he was surrounded by friends; people gravitated towards him thanks to his soft affability. With all of that taken into account, it wasn’t too much of a surprise when he started setting up behind the microphone at DBTS. Equally unsurprisingly was that those same qualities translated seamlessly through the songs he performed that night, each a carefully constructed tale that were at least somewhat reflective of his wealth of experience as a frequent international traveler.

The bulk of that set was culled from Oceanside Cities, a beautiful collection of expressive, folk-oriented songs that often feel as vibrant as they do weary. Oceanside Cities also boasts a level of grandeur that’s beginning to feel increasingly uncommon in the DIY-leaning scenes. Songs like “Dinosaurs” (which was rightfully paired with a very strong music video) give the record a cinematic, widescreen feeling, which also heightens the record’s more fleeting moments of greater intimacy. One of the moments that hits hardest comes in the form of the heartbreaking “Buyer’s Instinct”, which now boasts a beautiful music video that’s premiering here.

“Buyer’s Instinct” does have a surprisingly optimistic core but it becomes abundantly clear throughout the course of the song that the optimism’s been brutalized over time. Enhancing that subtle, warring aspect of the song are the visuals provided for “Buyer’s Instinct”, which put Cohen in front of some of the most distinctive street art murals in his home of Tel Aviv. The visuals are a striking complement to the nature of the song, each feeding into each other to create something that feels singular even before the superimposed home movie imagery that characterizes a haunting solo section comes into play. As an examination of human nature and the way it can evolve, erode, and decay while still being preserved throughout time, it’s a startling piece of commentary. As a music video for an emerging artist? It’s just about perfect.

Watch “Buyer’s Instinct” below and pick up a copy of Oceanside Cities here.