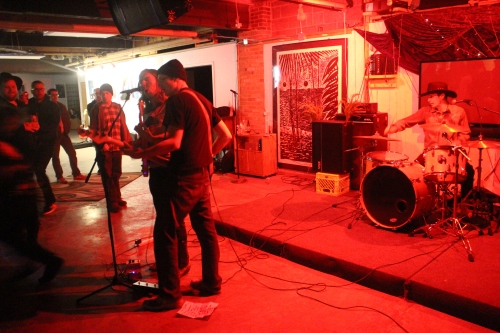 The members of Wood Chickens have been playing in various Wisconsin punk bands for several years so it makes sense that they’d sound as cohesive as they did right out of the gate. Combining a strong punk influence with an irrepressible roots influence, the band’s quickly gained a reputation as one of the state’s most exhilarating acts, both live and on record. On Saturday, March 18 they’ll be playing Kitch As Kitsch Can V, the fifth annual fest put on by Kitschy Manitou records. Before that, though, they’re unleashing the video for “Skunk Ape” on the world, which serves as both the title track for their just-released 7″ and as the lead-off single for their forthcoming full-length, Countrycide.

A kick-down, drag-out, country-fried punk missive, “Skunk Ape” finds the band operating in fine form and, with the accompanying music video, toying with some appropriately woodsy mythos that’s driven by a Sasquatch-like creature (which constitutes the narrative that drives the Skunk Ape 7″). The “Skunk Ape” clip’s as rough-hewn and energizing as the band’s music, which remains an off-kilter, ramshackle force. It’s a testament to DIY sensibilities and it nicely underlines the tenacity running through Wood Chickens’ music at seemingly every turn. More than just a great video, it’s a definitive portrait of a great emerging band.

Watch “Skunk Ape” below and pick up Skunk Ape from Kitschy Manitou here. .