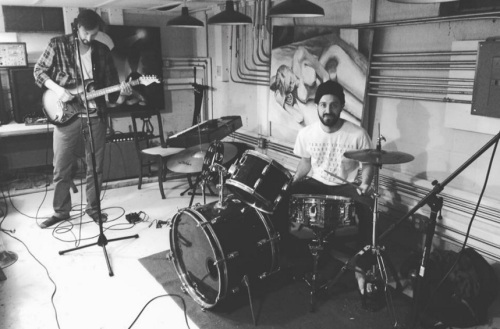 Somewhere over the past few years, Phil McAndrew became a vital part of Heartbreaking Bravery. The band McAndrew plays in, The Nudes, was kind enough to offer a song to the site for a premiere spot, he’s contributed to every edition of A Year’s Worth of Memories, and gifted the A Step Forward compilation with it’s gorgeous album art. A gifted musician, writer, and artist, McAndrew turns the attention to the time he set up a show for the first time. It’s a heartening read that can (and should) be explored below. Enjoy.

Right at the beginning of 2016 my pal Isabel sent me a message. Isabel was planing to take their band Izzy True out on the road in the spring with Painted Zeros and they were looking to play a show here in my zone, in Syracuse, New York. They asked if The Nudes would want to play too (I play drums in The Nudes) and wondered if I could set it up.

I’d played many shows before and I’d been recruited to draw flyers for a lot of shows over the years, but I’d never set a show up myself. I’d always been happy to let other people handle that stuff because it seemed like a lot of work and I don’t even really know how a guitar amp works. But I said yes, I will set this show up. So I asked my friend Jon (Spit Fam Tapes), who I was pretty sure had some idea of how guitar amps work, if he could help me run a show and he agreed.

Fast forward to April. The Nudes had finished recording some new songs and were scrambling to get a new tape ready in time for the show, which was set for April 9th and had swelled to a massive five band show. In addition to Painted Zeros, Izzy True and The Nudes, Crusher was coming up from Brooklyn to play and Real Things was coming up from New Paltz, New York.

All five bands were connected in some beautiful way – Izzy True were touring with their good friends and Don Giovanni label mates Painted Zeros. Painted Zeros had a practice space in Brooklyn right next to Crusher and had been helping Crusher record some songs. My brother Ray was playing bass in Crusher. My bandmate and roommate Shauna was good friends with Real Things drummer Kate, who I am pretty sure had previously played in a band with Izzy True drummer Angela.

I’d been pulling all-nighters for weeks trying to hit a final deadline for a graphic novel that I’d spent a year and a half illustrating. After staying up all night on April 7th, I’d managed to finish work on the book at 5:55 am on April 8. I slept for a few hours and then went with Shauna to a print shop to print inserts for the new tapes that we’d been working on. I was feeling very bonkers and scattered and exhausted, but also super powerful and full of excitement.

The next day I ran a bunch of errands and then met Jon at the venue, Spark Contemporary Art Space. Jon is a chef by day and he’d made food for the show and we had free coffee for anyone that wanted it and beer for anyone that knew to ask for it. We got the space set up and puttered around listening to music from my laptop, waiting for people (and bands) to show up. I had no idea if anyone would come! My worst fear was that nobody would come and I’d have to send four touring bands on their way with little or no money. Luckily somewhere between 100 and 150 people came (which most of the time is unheard of in Syracuse) and had fun.

Jon ran sound and I manned the door. We recruited our friend Brendan to do some live projector light art stuff, so the bands played with a backdrop of swirling liquid colors and lights. Everyone got wild and shredded. I don’t say this to toot my own horn, but it truly was one of the best shows I’ve seen in Syracuse, not only because of the quality of the bands that played but also because the space seemed to be actually glowing and pulsating with love and good vibes.

A drunk man hugged me at the end of the show and said “please do this again.” Another person told me that it was the first show they could remember seeing where they felt compelled to buy a record or tape from every single band that played. After the show Isabel gave me some Mœbius trading cards that they picked up on earlier on tour at a comic shop in Portland, OR, a gift that I still treasure and keep near my drawing space as a memento of this perfect day.

We had a total of thirteen or fourteen touring musicians who needed a place to crash that night. The sleepiest handful of rockers went and buried themselves in blankets at my dear sweet parents’ house after the show, which at the time was only about a mile away. Everybody else stayed up all night hanging out at my house. Jared of Painted Zeros was turning a year older at midnight that night and he demanded that people stay up and finish a bottle of whiskey with him. I remember being up very late in my kitchen, laughing with Jared and Jon and my brother Ray and Crusher’s drummer Kat. Eventually every nook and cranny of my apartment was filled with sleeping people, like the opening scene in Muppets From Space where characters are popping out of cabinets and bathtubs and dresser drawers.

Someone told me a few days later that it was the first time they could remember seeing a show in Syracuse where none of the bands that played were fronted by dudes. I know for a fact that there had been other shows here in recent memory where most, if not all of the bands, were fronted by people who are not dudes. But this person was right to point out that this is sadly a rarity here in Syracuse. And when it does happen, the show is often promoted as an “all girl band show!” or something. So I made it my mission to continue booking shows and to normalize shows where all or even half the people playing music are women (or people who don’t identify as male).

I realized that by continuing to occasionally take on the responsibility of booking shows (and helping friends with shows that they’re booking), I’ve been able to have some small bit of influence on the local music scene in ways that I think and hope are very positive. Plus, I get to make sure that bands that I am really excited about come through town every so often. I ended up booking a bunch of shows throughout the rest of the 2016 and already have one coming up in 2017 with two of my favorite bands.