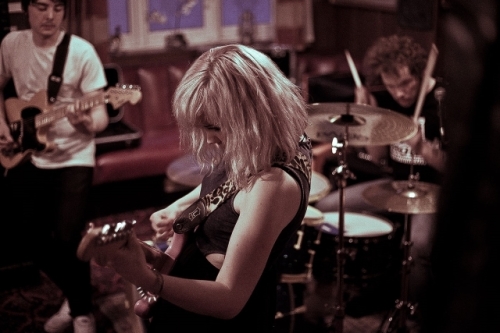 Tuffy, TERRY, CuckooLander, Soft Fangs, Valley Queen, Cheena, Suuns, and Hot Flash Heat Wave were just a small handful of the bands responsible for releasing exceptional music videos over the past two weeks. While all of them were worth watching, it was the visual accompaniment for Doe‘s recent standout “Sincere” that earns this post’s spotlight.

One of the many reasons for Doe’s artistic success has been their willingness to subvert expectations. Whether those might be the limits of their genres or even in their instrumental approach (two guitarists, no bassist), they’ve continuously excelled in winking at normalcy. Now, they’ve applied that approach to the music video format and the results are both endearing and massively entertaining.

In “Sincere”, the band experiments with a visual depiction of malaise, the somewhat tired trope of grossout food footage, and even something as subtle as ratio presentation. For a clip where there’s ostensibly nothing happening as far as a linear narrative thread is concerned (apart from the meditation on how repetitive and mundane life can be), that’s an impressively complex setup.

Mixing in low-grade special effects, strong visual composition, and crisp editing, “Sincere” is progressively elevated throughout its overall running time. As with all great clips, the song and the video inform each other, operating in a symbiotic relationship with virtually no drawback. As the band members dispassionately mime the words to the song in an effectively tongue-in-cheek runner, the Andrew Northrop-directed clip capitalizes on a modicum of momentum to hit a climactic section that involves the band remaining blasé while a variety of odd things happen with their food selections.

It’s a humorous moment, elevated by the band’s impressive deadpan performances but it’s overshadowed by the last section of “Sincere”, which takes a sharp left and sees guitarist/vocalist (and A Year’s Worth of Memories contributor) Nicola Leel breaking character and dissolving into laughter before rapidly cutting to a series of loose chaos and finally settling on a short vacuum clean-up sequence.

In those moments, “Sincere” transforms from an entertaining curiosity into a legitimately great video. By pulling back the layers of conventional expectation that’s normally applied to the type of clip that’s typically so aggressively straight-laced, Doe open up an invigorating new territory. It’s a wildly satisfying reveal that paints the entirety of “Sincere” as both radical deconstruction and loving homage. In short, it’s perfectly, unequivocally Doe.

Watch “Sincere” below and pre-order Some Things Last Longer Than You from Old Flame here.