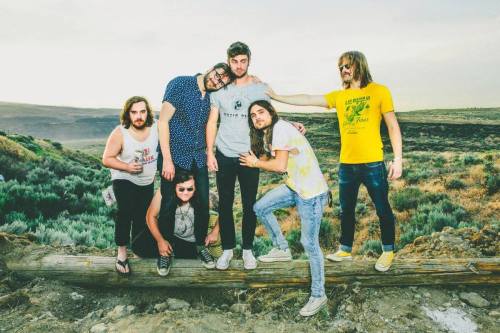 After making their mark a few years back, Diarrhea Planet have refused to slow down- if anything, they’ve been fearlessly accelerating. Despite a slew of member changes and temporary setbacks, the band’s somehow grown more focused, a fact evidenced by the surprisingly sharp and (of course) ridiculously-titled “Bob Dylan’s Grandma”. The band scales back their trademark bombast here to latch onto something that feels clearer and less manic, which winds up benefiting the band in intriguingly unique ways.

By continuing to enhance their more melodic bent and trimming out the wild excess of their earlier material, the band winds up with a staggering number that somehow manages to feel completely of its time while still paying due reverence to the band’s influences from acts of decades long past. There’s a newfound emphasis on vocal performance and lyrical narrative as well, which suits the band far better than most may have expected.

Of course, there are still theatrics to be found that are peppered throughout “Bob Dylan’s Grandma” (this is a Diarrhea Planet song, after all)  but even those feel remarkably restrained, especially when compared to the vast majority of the band’s previous output. Tasteful dynamics drive and, arguably, dominate the proceedings which never veer too far off of one of the most direct courses the band’s ever set. All of the unexpected choices culminate in one of the band’s best efforts to date, leaving the impression that the band’s far from over and still has plenty of things left to say.

Listen to “Bob Dylan’s Grandma” below and pre-order Turn To Gold from Infinity Cat here.