MOURN – Gertrudis, Get Through This! (Stream) 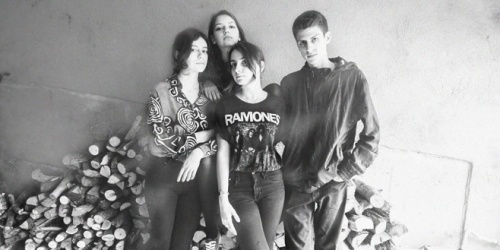 MOURN hit this site with the force of a runaway train and created a crater in the wake of Captured Track’s unveiling of the live clip of “Otitis” that accompanied their signing announcement. Now, the band’s following up their acclaimed self-titled release with a spiky single, Gertrudis, headlined by the almost-title track “Gertrudis, Get Through This!”.  As has been the case with the preceding posts, this wasn’t the only release that merited a reasonable amount of attention to have appeared throughout the past week. Chuck Ragan released an incredibly effective artistic lyric video for “Vagabond“, his collaboration with Lucero’s Ben Nichols, Jon Snodgrass, and Chad Price while World Cafe released the full recording of their recent Hop Along session (which made an appearance in the last Watch This). Tomorrow’s Tulips hit a career high with their meticulously constructed video for “When” and Rice Milk’s hypnotic burst of minimalist basement pop, “Take My Weight“.

While each of those four selections deserve to be heard (and seen), it’s MOURN that earn the title feature this time around on the sheer magnitude of “Gertrudis, Get Through This!”. From the opening cadence that gets fired off like a countdown to the anthemic chorus, this exudes powerhouse. Sharp and intuitive, the track serves as a blistering reminder of the band’s unique strengths, providing an extra exclamation point to their spectacular self-titled effort. Fiery and unyielding, “Gertrudis, Get Through This!” bodes well for the band’s future and seems to indicate their resistance to any outside pressure. Call it a declaration or call it a manifest, just make sure to also call it what it truly is: a great song.

Listen to “Getrudis, Get Through This!” below and pick up Gertrudis from iTunes here.

One Comment to “MOURN – Gertrudis, Get Through This! (Stream)”