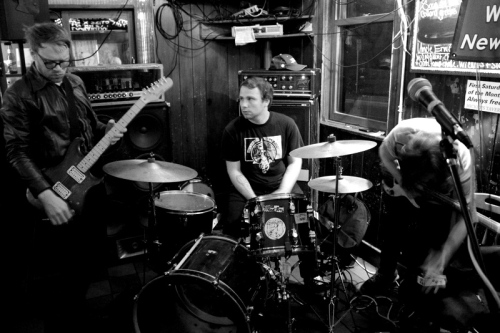 Over the course of my interest in music, particularly music that resided within the confines of DIY, no band’s meant more to me than Tenement. Back when the band spent their time running shows out of the sorely-missed BFG house, I’d be there at every possible opportunity- but that’s skipping ahead of the beginnings of the story. Back in 2008, I booked Tenement to play a small coffee shop that frequently hosted shows on not much more than a whim. It was one of the first shows I ever had a hand in booking and it immediately became one of the most memorable- not just for that reason- but because what Tenement left up on that small stage (one they invited the entire crowd onto) was something I’d spent years looking for: a band more punk than pop who were at least somewhat defined by a sense of well-informed literacy.

In subsequent reviews (across various publications) that I wrote about Tenement’s music, I’d frequently compare guitarist/vocalist Amos Pitsch’s exacting sense of detailed Americana to authors like John Steinbeck. In lyric copy, Pitsch frequently zeroes in on the mundane aspects of everyday life that too frequently go unexamined (and, subsequently, uncelebrated). While this is an aspect of the band’s music that’s gained an unbelievable amount of clarity over the years, its characteristically humble beginnings can be heard in songs like the fiery “Morning Mouth”, which is one of a handful of songs the band’s remastered for an upcoming early music compilation entitled Bruised Music: Vol. 1. Incidentally, “Morning Mouth” was the second song I ever saw the band live- and the one that immediately convinced me I had a new favorite band.

Spending some time at The BFG always reaffirmed my earliest suspicious about Tenement after that show- the band’s versatility was shaped in part by their extremely diverse listening habits. It was impossible to spend thirty seconds flipping through any one of the thousands of releases that littered that house and not jump from 80’s hardcore to free jazz session recordings to sludge to the golden era of soul, all of which would be directly underneath an unending murderer’s row of killer flyers for (increasingly strong) bills that the house hosted. It evoked the ideal of the American melting pot more than just a little and, in a way, furthered the band’s identity. All of that, the feeling of sense and place, comes back as acutely as possible when revisiting a song like “Morning Mouth”- it’s undeniably indicative of the promise Tenement continues to fulfill and exceed while remaining a powerhouse in its own right.

Surprisingly intricate passages of “Morning Mouth”, which was originally released on the False Teeth 7″, revealed the band’s enviable talents at an early stage of their career while also betraying the band’s songwriting mastery. Hooks followed hooks, always with the momentum of a sledgehammer blow to the gut, while the band seemed to be on the verge of spiraling towards an unimaginable ascension. Burning bridges, a keen sense of surroundings, and an absolutely vicious musical performance are some of the more defining elements of “Morning Mouth”, which remains the warning shot that convinced me that Wisconsin had a band worthy of staggering levels of admiration. It may not have been the band’s only early warning shot but it remains one that holds a significant amount of power to this day. Who knew indulging nostalgia could be so invigorating?

Watch that early performance on a stage full of people below, listen to the Stereogum premiere of the remaster here, and pre-order Bruised Music: Vol. 1 from Grave Mistake (in collaboration with Toxic Pop) here.