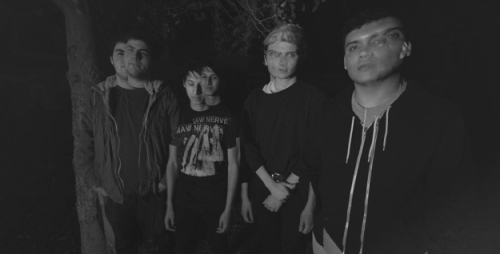 This week has had no shortage of great material to choose from thanks to great new songs from the likes of Glish (whose upcoming self-titled is among the year’s best releases), Miss Destiny, Straight Arrows, Colleen Green, Cozy, and VCR. There were also eye-catching music videos from the likes of site favorites Creepoid and Happyness to round things out on the visual end of the spectrum. One of the most arresting things to be introduced into the world, though, was Happy Diving’s lo-fi basement punk rager “Weird Dream”.

Bookending a song with sheets of feedback is a bold move that normally indicates a fair amount of aggression. It’s a trick that Dinosaur Jr. has used to great effect and a proclivity that Happy Diving seems to have picked up (among a few others that offer a strong connection between the two bands). From the scorching guitar work to the scuzzy production, “Happy Diving” isn’t content to drift by without landing a cavalcade of punches. As damaging as it is damaged, the song’s one hell of an introduction to a band on the verge of releasing their debut record, Big World, through a label as revered as Father/Daughter Records. If “Weird Dreams” does prove to be truly indicative of what Big World has in store, October 21 can’t get here fast enough.

Listen to “Weird Dream” below and make sure to pre-order Big World directly from Father/Daughter Records here.