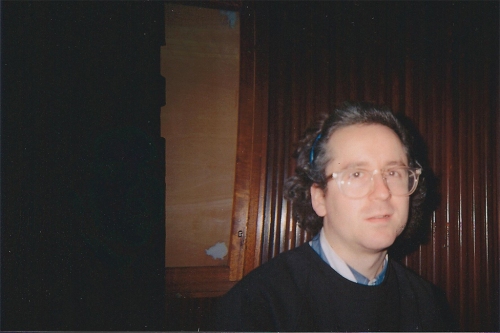 Hot Chip‘s excellent The Warning can rightfully be regarded as a classic record of a certain age and, at some point, it may even be viewed as definitive. A large part of its success can be directly attributed to principal songwriter Alexis Taylor, who maintained a strong grasp on a project that’s ideas frequently came across as boundless. The warmth that Hot Chip exuded was often slightly undercut by his penchant for the bittersweet but that still doesn’t make the reveal of  the devastating “I’m Ready” any less jarring.

Taylor’s newest project, and the first under his own name, is a solo piano venture that trims out any excess in favor of an intimacy that’s startlingly direct. Taylor opens the track with a wistful line that registers as more of a question than a statement, wavering in a relative uncertainty: “Don’t you know I’m ready?” As the song progresses, Taylor builds up a heartbreaking case for self-worth as an air of ambiguity increasingly deflates any projected confidence.

No track in 2016 has stopped me cold and stolen my breath faster than “I’m Ready”, which somehow manages to incorporate silence as an effective instrument (even when it draws to an unceremonious close, the noises of everyday life seem like an integral part of Taylor’s statement). There’s beauty to be found in all of the cracks and bruises that life administers in varying portions and “I’m Ready” combines them all into something heartrending and poignant. Simply put, “I’m Ready” is unforgettable.

Listen to “I’m Ready” below and pre-order Piano here.

Over the course of the year, one format or another has been stuck functioning in catch-up mode. Today, with this post, everything that falls under the regular umbrella coverage will be brought up to the present release cycle. In a way, then, it makes sense that something as blistering and urgent as “Apple Hill” grabs this post’s focus. Even more fitting is the fact that it comes from the first band to be signed to Honor Press, the newly created label of Perfect Pussy‘s Meredith Graves (whose fundamental importance to this site and its continued existence simply can’t be overstated). While all of that will be addressed shortly in greater detail, it wasn’t the only excellent musical offering ushered out into the world over the past week. To that end, just as in the preceding post, a list of full streams and songs that deserve hearing.

“Apple Hill” scales back the feverish tenacity of “Merv King” for something that manages to come off as both more brutal and more refined. Marrying post-punk, noise punk, and one of the more sinister breeds of hardcore definitely isn’t an easy look to pull off convincingly but “Apple Hill” wields that formula like a weapon. Brimming with an astonishing confidence and unerring conviction, it immediately transforms itself into something undeniable. Starkly unforgiving and shockingly immediate, it lays some deeply compelling groundwork for the band’s upcoming record, the exquisitely titled The Unlawful Trade of Greco-Roman Art. It’s a deceptively intuitive piece of songwriting that revels in its own pent-up frustration and, finally, the shards of cathartic release embedded throughout “Apple Hill”. The bass gets buried in fuzz, the drums zero in on the instruments intrinsic ability to become propulsive, the guitar line throws convention to the wind, and the vocals take the whole thing to a fascinating, wild-eyed realm. By the song’s end, So Stressed have created an immersive world that’s as punishing as it is intriguing; an unexpectedly strong effort that sets up The Unlawful Trade of Greco-Roman Art. Give into its whirlwind ferocity or get the hell out of the way.

Listen to “Apple Hill” below and pre-order The Unlawful Trade of Greco-Roman Art from Honor Press here.

Now that the site’s all caught up on songs, it only seemed natural to overhaul the music videos as well. Here, the formatting will be slightly different than it has in the past for this format, with 35 excellent clips being linked beneath the main feature, Meat Wave’s slasher-indebted short that accompanies the bruising “Sham King” off their tremendous EP from this year, Brother. Before going any further, it’s worth noting that Meat Wave is one of the few bands that will always have a special place carved out in reference to this site, having played the first-ever Heartbreaking Bravery Presents to help this place celebrate its first anniversary (several months after they were featured as part of the site’s On the Up series). Their self-titled record is still one of the best things to have come out of this decade, so any time the band does anything of note, it’s probably a safe bet it’ll secure a feature spot here. Which leads us back to the focus of this piece: “Sham King”.

In the Andrew Robert Morrison-directed clip for “Sham King”, a lot of things are at stake. Most notably, the bands lives. A grim reaper figure, complete with a scythe atop a bicycle, mercilessly stalks the power trio through dead, snow-capped streets. During the opening chase, Morrison (who also edited the video) injects the clip with a serious sense of dissonance with furiously paced loop-back smash cuts, lending the affair an added sense of disquiet. Before long, death zeroes in on guitarist/vocalist Chris Sutter, who leads the masked figure on a chase through an abandoned warehouse. Vantage points switch and become a narrative function as the viewer’s occasionally allowed to take on the first-person viewpoint from behind the killer’s mask, effectively rocketing up the video’s sense of tension. When one side emerges victorious, a solo is mimed in front of a towering wall of various amps before giving way to the video’s final shot- which ranks among one of my favorite images from the year.

Watch the madness of “Sham King” unfold below and pick up the Brother EP here. Beneath the clip, watch 35 other great videos from the past few weeks. Expect regular coverage to resume throughout this new week and going into the future.