The Glow – Am I (Album Review, Stream) 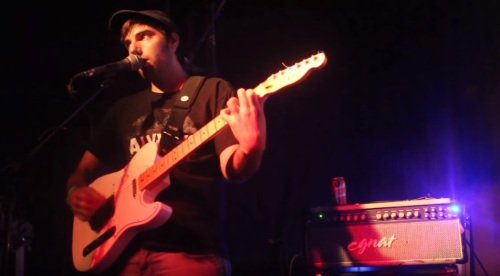 LVL UP was a band that meant an extraordinary amount to a handful of people and publications, this one included. Losing them last year was a hard pill to swallow but the band’s dissolution allowed its members to pursue freshly formed or revived projects that were of a more directly personal nature. One of those projects was multi-instrumentalist Mike Caridi’s The Glow, which had existed in various forms throughout the years but never released a proper album.

Am I corrects that fact with a kaleidoscopic grace. Caridi’s warped pop-leaning sensibilities shine though this material, even as it gets coated in fuzz and distortion. Am I effortlessly builds a surrealist world both around and inside of its songs, conjuring up images of schools, rivers, lost youth, and open skies. There’s a smoky nostalgia that lingers in the corners, as Caridi soothes, broods, reflects, and embraces various aspects of the songwriter’s personality.

Breezy and endlessly enjoyable, Am I is best enjoyed with a good pair of headphones — the production work throughout is remarkable — and without distraction. There are endless layers to be uncovered in the habitats that Am I creates and revisits, each teeming with fresh life. A quintessential spring record, Am I also doubles as a necessary reminder that when good things have to end, there are other memories to be formed and paths to be forged once the dust has settled. In all, Am I is a fresh start and a poignant reminder of Caridi’s outsize songwriting talent. One of the year’s most enjoyable basement pop listens.

Listen to Am I below and pick it up from Double Double Whammy here.