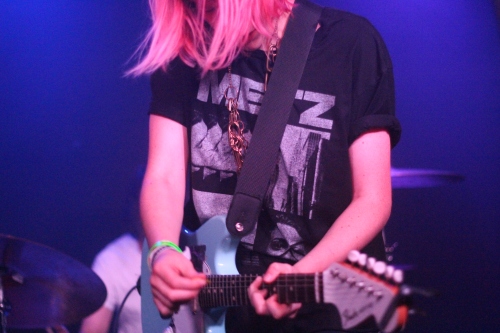 When Dilly Dally‘s “I Feel Free” announced the band’s return, a lot was made about how the band’s initial touring schedule and international attention nearly killed them forever. Part of this was because of the stress levels that attention necessitated and the resulting struggles that existed within the band’s makeup. Alcoholism was a vice that hit especially hard and is a subject that gets pushed to the forefront of the band’s follow-up single to “I Feel Free”, pointedly entitled “Sober Motel”.

Weathering all of those storms and fighting through life’s difficulties seems to have made Dilly Dally a stronger band, with “Sober Motel” and “I Feel Free” standing  as pillars of proof. The band can still go scorched-earth with the best of them and they’re leaning even harder into the rest-and-explode dynamic that helped them make their name. “Sober Motel” showcases this especially well, with Katie Monks unleashing one anguished howl after another (Monks’ voice remains one of the best instruments any band today has to offer) as the band provides some complementary grit. It’s a characteristically breathtaking track from an original voice that found a way to survive. We should all be grateful.

Listen to “Sober Motel” below and pre-order Heaven here.