The Best Full Streams of June’s First Half 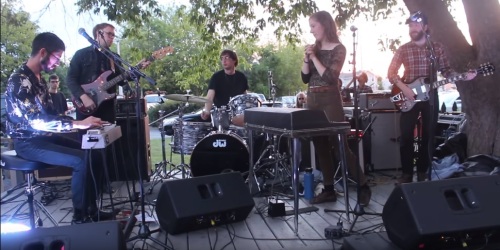 In the opening half of June, a large handful of worthwhile records found their way into the public consciousness. Most of the five below (with one notable exception), only gained traction among niche audiences but were imbued with the kind of power that can make those numbers grow in increments. All of them, as ever, are more than worthy of purchasing from the band or label responsible for their release. A handful lived up to the hype and at least one seemed to appear from the ether. Give them all the kind of investment they deserve.

Easily the highest-profile record on this list, site favorites Snail Mail made good on their early promise with a Matador debut. Debuting at a heartening 56 on the Billboard charts, Lush catapults the project into the public eye. Riding a wave of acclaim for their strong early work, sterling live show, smart marketing, and the strength of their advance singles ensured that Lush would be greeted with fanfare. That it’s devoid of any glaring weaknesses or gaps leaves the record as a testament to Lindsey Jordan’s abilities as a songwriter but more importantly, establishes Snail Mail as a genuine artist.

Constant Image, the debut full-length from Flasher is one hell of a coming out party. Taut, hyper-melodic, and genre-blurring, the record’s a perfect encapsulation of a band that’s fully aware they’re coming into their own. Everything from the production to the sequencing here serves a larger whole rather than relegating distinctive sections. Every song on Constant Image is a career high for a band that’s already amassed a fairly impressive discography over a few short releases. Constant Image shouldn’t just put their name on the map but lock itself into the kind of heavy rotation slot that doesn’t get vacated.

Rolling Blackouts Coastal Fever are an act that’s been featured on this site multiple times for a handful of years, which makes it all the more surprising that Hope Downs is their first official album. What’s not as surprising, especially given that time to figure things out, is that it arrives fully-formed and eschews all of the easy traps lesser-versed bands fall into so frequently. The band knows there’s an advantage to risk-taking that doesn’t overreach and has figured out how to fully lock into their open-road identity. Hope Downs applies that wisdom spectacularly and winds up as an Americana-tinged triumph.

Likely the least recognizable release on this list, The Knees’ Stammer more than earns a spot among its contemporaries. Two songs of great, delirious post-punk that find fascinating ways to ramble with purpose. Aimless bridges on the title track add an impressive amount of hazy atmosphere, while the ridiculously fun “abcdefghijklmnopqrstuvwxyz” offers up a galvanizing version of a childhood classic. Subversive, unexpected, brimming with confidence, and delivered with a tenacious conviction, Stammer is one of the great unexpected surprises of 2018’s middle stretch. Give it a listen and leave it on repeat.

Dusk is a tricky record to judge on merit, as it’s essentially a glorified repurposing of a demo that was released by the earliest iteration of the band. Four songs are added (including one that’s an alternate take on a song from bassist/vocalist Amos Pitsch‘s other project, Tenement) and provide a layered depth which is welcome but where Dusk earns its spot on the list in its reinvention. Every single one of these songs benefits from what the band has become and to present them as a collective reintroduction makes sense, considering those changes have been so drastic.

As a collective, Dusk leans into soul as much as classic country, congealing all of their influence into something that’s become reminiscent of The Band, which is a far cry from their first recording. All of the songs here prove worthy of longevity, enhancing an aspect of timelessness. Dusk’s a remarkable band that’s found their power through evolution, settling into a final form that’s got a whole host of material up its sleeve. For now, we should all be more than content to sink into the spells these songs weave and be grateful to have another genuinely great record to add to our collections.