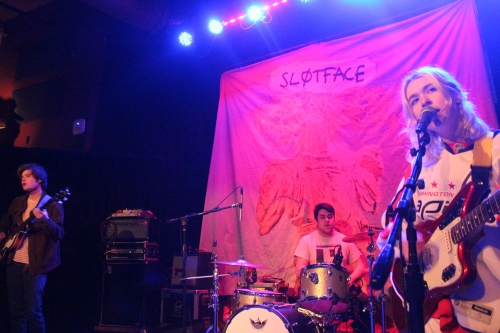 The last week ended strongly, offering up an absolute treasure trove of full streams for a host of records that may find themselves being discussed again in December. Speedy Ortiz, Double Grave, Rachel Angel, Spielbergs, Holy Now, Anemone, Sibille Attar, Launder, Porlolo, and Grouper were all artists that played a part in that outpouring (as did the just-featured Forth Wanderers). Still, the focus of this post falls to an entry in a different format entirely: Snail Mail‘s elegantly crafted and surprisingly pointed clip for “Heat Wave”.

The solo project of Lindsey Jordan, Snail Mail has been making a series of incredibly smart decisions over the past year, including their partnership with Matador Records. Another one of those decisions was enlisting Brandon Herman‘s talents for the clip, allowing the filmmaker to handle directorial, editorial, and DOP duties with aplomb. The project and the filmmaker have delivered a carefully constructed metaphor for the importance of fighting for yourself, even in the face of unfavorable odds and seemingly insurmountable pressure.

“Heat Wave” finds clever ways to make its timely heft an incredible amount of fun (without sacrificing an ounce of integrity). Centered on Jordan, wrapped up in a hockey-centric escapist fantasy, “Heat Wave” refuses to pull punches throughout a range of exceptional moments, from an anxiety-inducing confrontation to some cathartic moments of unbridled rage. By the clip’s finale, Jordan’s made sure that absolutely nothing’s left on the rink and that the songwriter can escape with both contentment and a touch of pride.

Uplifting and upsetting in turns, “Heat Wave” is an effective portrayal of the themes frequently deconstructed by the clip’s protagonist. It’s a gentle reminder of societal culpability and just as effective as a demonstration of how our own convictions are necessary for not just advancement but survival. The song’s a new highlight for the project and the clip is its best to date. We should all be grateful that Snail Mail’s being given the chance to accelerate.

Watch “Heat Wave” (and a live performance of the song) below and pre-order Lush from Matador here.