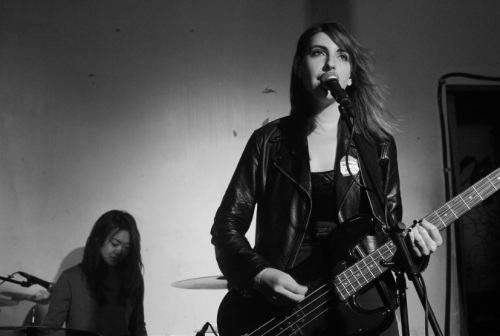 There are not enough kind words to adequately describe how much Loren DiBlasi has meant to this site and its development. One of the people that’s been supportive since the very beginning. she’s been a vital part of every edition of A Year’s Worth of Memories and has been kind enough to deliver another one of this series’ essential pieces. Life-altering experiences, panic attacks, family, self-assessment, and music abound in another burst of admirable sincerity from the Patio bassist/vocalist and MTV News editor. As always, it’s more than worth the read.

Not Getting to the Gig

I remember my first show. It was a “concert,” really, but the concept was the same — I was seeing live music, of my own choosing, for the very first time. October 17, 2005. I was sixteen. Franz Ferdinand headlined the Theater at Madison Square Garden with TV On The Radio and Cut Copy (again, 2005). My birthday was months earlier, but I hadn’t asked for a party. Instead, I waited until my favorite band came to my city, then bullied my mom into driving me and three friends to see them. I wasn’t allowed to take the train into the city alone. And yet, I had never felt more free.

This is it, I remember thinking. I’m going to be part of this. At the time, I didn’t think I’d ever play music. I’m not sure I thought I’d write about it, either. I was sixteen. I just knew that it was mine, and now that I’d found it, no one was ever going to take it away from me. Though tiny from my distant seat, the people onstage were gods, not men. The room was huge but the experience was intimate, because it was all happening to me for the first time.

I remember my first panic attack at a show. July 3, 2015. Pile played the Bell House, and I had postponed my Fourth of July weekend trip in order to see them. I was too wrapped up in self-denial to realize that this show, in particular, was one I shouldn’t have planned to attend. Not because of the band (whom I love and haven’t seen since) but because of other, more personal reasons. My deeply broken, damaged heart — and even more damaged mind — simply wasn’t ready. I made it to the bathroom before realizing I could no longer breathe. It was the single worst night of my life.

So much happened in the ten years between those two nights. I developed my passion for writing and left high school. I moved to the city to attend college, mostly in search of more music. I graduated and didn’t get a job. I moved back home. I took the train back and forth for job interviews and intermittent writing gigs. I wrote art reviews, band profiles, even TV recaps. I got paid for none of it. I kept writing whatever I could until people started noticing. It took a long time, but they finally did.

Eventually I said “fuck it” and moved into the house my family owns in Ridgewood, Queens, which they’d kept and rented after moving out of the city. Growing up, the house in Ridgewood wasn’t where I’d thought I’d end up. To my family, Italian and tenacious, that was the place they’d left in favor of better schools and more square footage, and there was no going back. They wanted me to live in the city, but not in Ridgewood. At 24 and broke, I had no choice.

Little did I realize that Ridgewood was exactly where I wanted to be. In Ridgewood I was a short train ride from Williamsburg, home of Death by Audio, Glasslands, and 285 Kent. I was a seven minute drive from Silent Barn, Palisades, and cult house venue David Blaine’s The Steakhouse. Shea Stadium was nearby, too; I even found an internship at a startup music site on the same block as Shea. I always tell people that my career started at Shea, when Dan Goldin introduced me to Derek Evers of Impose at a Big Ups show. I can trace every word I’ve written since back to that single moment. It was March 21, 2014, three days before I turned 25.

Throughout the next year and beyond, I don’t think I missed one show. Going to the show was my life, and the only life I’d ever wanted. Making actual money — to eat, pay my bills, go to the doctor — would come later, but at the time, I didn’t care. I couldn’t buy anything. I walked most places and I was really skinny. But I was there.

I made so many friends there. Label people, band people, fan people like myself. People started sending me their stuff so I could write about it for whatever small publication or local blog I’d be connected to at the time. If two people read it, I’d done my job. I was so happy. I wanted to be a voice within the community that I was starting to make my own. The fact that I now work for an huge corporation is funny to me, still, which isn’t to say I’m not grateful for MTV News and the people (many of them idols) I work with every day. I take nothing for granted.

But this isn’t a happy tale — at least, not entirely. When the show is your life, and then you lose it, you have no life. This is what I thought. This is what I believed. I felt it was my fault. I made myself a victim for a long time, and as a result, I stopped going places entirely. Especially to shows.

To say that this dark period was the result of the dissolution of my relationship with another person is extremely diminishing — that’s where it might have began, but there was so much more in the middle. So much emptiness that I had to claw through, so much aloneness that I had to grapple with and make peace with and explore to find the origin of. Not for a second of last year did I feel “normal,” and yet I was finally experiencing human emotions in a very normal way for the first time. Coming to terms with pain is terrifying and yet entirely necessary if you plan to live a “normal” life. Which I’d always wanted to. I never wanted to give up.

I’ve missed so many shows in the last two years. I still miss so many shows. I can blame my schedule or the demands of Patio or money or whatever else I want, but deep down, I know that I am still very afraid. When your emotions are so deeply tied into everything you do and the places you go, it’s hard to walk into a room where you know you are vulnerable (the anticipation is the worst). SXSW was particularly difficult for me this year, despite the fact that my band hadn’t even released any music and was still invited onto a bill alongside Mitski, Washer, Palm, Kal Marks and Guerilla Toss. I got drunk and shed a lot of tears. I also reconnected with old friends and had one of the best days of my life. I shared a moment of clarity with someone that I’d really needed, despite being afraid of it for so long. Thinking about it still makes me cry but I also think it was so beautiful. That’s how I look at the world now; there is no light or darkness. Everything is grey.

Show anxiety often feels extremely specific, and it wasn’t until I started becoming more vocal about it that I realized others around me had been experiencing it, too. Getting to the gig is supposed to be fun and fulfilling — it was my entire social life — but when it’s not, it sucks worse than anything I’ve ever experienced. But what I’ve learned in the past two years is that sometimes it’s okay to stay home, and that’s nothing to feel guilty or ashamed about. Sometimes you need a night in to relax in a robe watching The Golden Girls and eating delivery nachos (this very scenario is what first inspired the concept of “Luxury” that drove Patio’s first EP). Writing music, reading books, and having dinner with old friends are some other things you can do instead of going to the gig. There are other places than the gig. The gig will always be there.

I’ve accepted that it’s at the gig, surrounded by friends, where I often feel most alone. Even this very moment, as I finish work and get ready to go see Washer, my stomach feels queasy and I can’t help but wish I could just go to sleep early tonight. It’s definitely okay to do that, but this time, I won’t. I know that when I climb the stairs to Shea I’ll be climbing my way to a million friends, and it doesn’t matter who else might be there or what anxieties I might face. Sometimes I go to the show; sometimes I play the show; sometimes I stay home from the show. I’m not sure if that ending is happy or sad. But I think next time Pile plays New York, I’ll be there.

Filed Under: Uncategorized
Tags: A Year's Worth of Memories : Loren Diblasi : MTVNews : Not Getting to the Gig : Patio