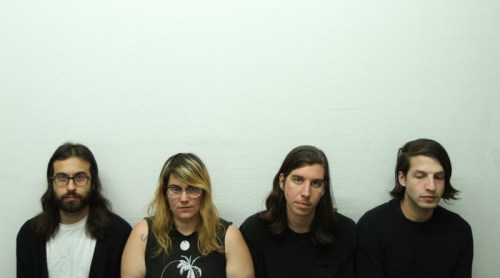 The first trio of days this week were comprised of a large handful of impressive full streams that came via Ghost Gum, Katie Ellen, Ganser, Sculpture Club, The Royal They, Joey Sprinkles, Idiot Genes, Tongues, Edgar Clinks, Jackson Boone, Kyle Morton, and Residuels. There was also an incredible compilation that came courtesy of a collaboration between Swell Tone and Z Tapes entitled Summer of Sad. While each of those releases deserves all of the investment they’ll undoubtedly receive and more, this post’s feature spot falls to the great Fake Palms and their outstanding forthcoming EP, Heavy Paranoia.

Back in 2015, Fake Palms grabbed another of this site’s feature spots for their dark, insistent “Sun Drips“. It’s astonishing how much the band’s grown in that time and Heavy Paranoia is concrete proof of their accelerated sense of artistry. From the onset, Heavy Paranoia ably demonstrates the band’s creative expanse with the towering “Collar Bone”. Riding the crest of a monstrous wave of hooks, sharp riffing, and a cold atmosphere that’s — somehow — conjured up by almost exclusively warm tones, “Collar Bone” immediately becomes distinctive and sets a ridiculously gripping precedent for the quartet of tracks to follow.

“Holiday” and “Frequencies” both hurtle along at a quick pace that still allows Fake Palms to establish a sense of expanse. Both tracks are perfect examples of the band’s acute awareness of dynamic structure, successfully playing several angles in one fell swoop. Whether it’s to create a sense of mild discord through committing to figures designed to emphasize ambient effect rather than melody or in shifting the tonal qualities of their tracks, every idea works beautifully. Importantly, the band also expertly navigates the pacing of Heavy Paranoia, lending it a feel of completion that few EP’s have managed to achieve.

By the time Heavy Paranoia‘s closing track hits, Fake Palms have already secured the EP the distinction of being the best release of their career. Fortunately, that last track, “Snowblink”, only solidifies that distinction. As characteristically spare and relentless as the preceding songs on this miniature post-punk masterpiece, “Snowblink” does eventually hit an enormous, sprawling moment that serves as the climactic final sequence of both the song and the EP. Those final three minutes are the most exhilarating of a release that’s never anything less than arresting and ensure that Heavy Paranoia‘s a release worth remembering.

Listen to Heavy Paranoia below and pre-order the EP here.

Filed Under: Uncategorized
Tags: 2016 : A Place to Stand : Bubble Guts : Buzz : Buzz Records : Edgar Clinks : EP Review : EP stream : Fake Palms : full stream : Ganser : Ghost Gum : Heavy Paranoia : Hurricane : I Live In A Tree These Days : I Really Have to Get My Life Back on Track Before I Cut All My Hair Off : Idiot Genes : Jackson Boone : Joey Sprinkles : Katie Ellen : Kyle Morton : Lo-Fi Home Recordings : Lo-Fi Home Recordings (2011-2015) : Oof Bonk : Pyrrhic Victory : Residuels : Review : Sculpture Club : Summer of Sad : The Past The Future Dwelling There Like Space : The Royal They : Tongues : TV Dreams : What Will Destroy You