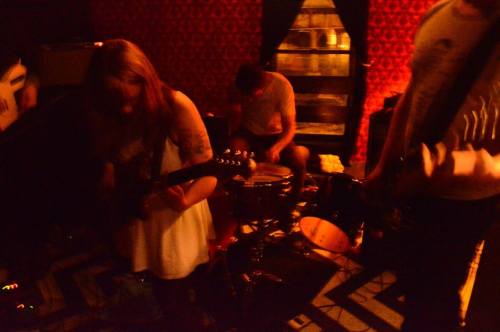 The band first teased this release more than a full year ago by uploading an early, unfinished version of “Mount Kool Kid” to their bandcamp. That version’s been pulled in the time that’s elapsed since its quiet release and its absence has finally been amended with the release of the band’s latest 7″. “Mount Kool Kid” remains an absolute beast of a song, echoing shades of the very best noise, basement punk, and hyper-spastic pop acts in one fell swoop.

Even though it wears all of those influences proudly, “Mount Kool Kid” is still very distinctly Melkbelly. The enhanced production brings out a near-feral rawness in the track that was previously buried, albeit still evident. Everything hits tremendously hard in this more polished version, utilizing Albini-esque tactics for the drum sounds and providing some layers that allow it a more expansive sound.

The flip-side of the 7″ is “Elk Mountain”, which dials back the ferocity to expand on the band’s penchant for grunge and sludge-leaning moments. While the tempo recedes, the abundance of feeling remains in tact. Not a moment of “Elk Mountain” is anything less than exhilarating. Guitarist/vocalist Miranda Winters helps set these songs apart by infusing them with a surprising amount of delicacy that elevates both of these tracks into the realm of the sublime.

Both “Mount Kool Kid” and “Elk Mountain” are incredibly dynamic, compelling  tracks that near the four-minute mark. For virtually every second of their run-time, there’s an admirable choice that manifests in the songs. Whether it’s a drastic tempo change, a vocal run, a runaway drum break, or a sudden commitment to overwhelming heaviness, those choices enliven both tracks, leaving Mount Kool Kid b/w Elk Mountain as one of the best 7″ releases anyone’s likely to hear in 2016. So, stop reading, hit play, surrender to the band’s chaos and get swept up in the frenzy.

Listen to Mount Kool Kid b/w Elk Mountain below and pick up a copy here.