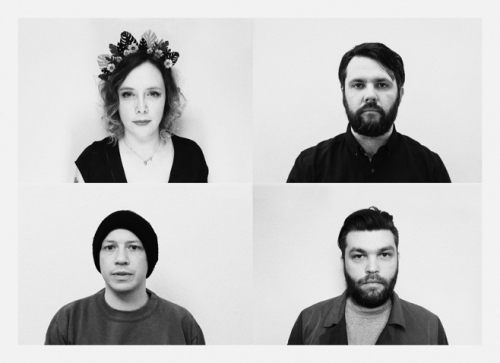 All of the above links contained strong material but none of those titles were as legitimately breathtaking as Minor Victories‘ latest music video, “Cogs”. The band’s been steadily revealing some of the most captivating music videos of 2016 by embracing the virtue of restraint. The best of those — the strangely moving clip for “Folk Arp” — saw them perfecting the art of the static shot, which had defined their prior two clips (“Breaking My Light” and “A Hundred Ropes“).

Following the conclusion of that static shot trilogy, the band’s turned their attention to motion. “Cogs”, which was released Monday, hinges on an exceptionally acute sense of fluidity. Presented once again through a crisp black and white, “Cogs” opens on a slow-panning shot of seemingly empty woods. Before long, a figure enters the frame at full sprint, though the video never wavers in its commitment to slow motion, unfolding at a pace that considerably heightens the tension. It’s an expertly staged trick, allowing the serenity of the setting to take on sinister undertones.

As “Cogs” goes through the motions, the central figure’s pulled tighter to the lens and some disconcerting imagery comes into play. The person assumed to be the protagonist of “Cogs” is a balding man, dressed in a hospital gown, whose movement grows more frantic and erratic with each step. It imbues “Cogs” with a sense of mystery that elevates the tension even further, prompting a series of questions that will go largely unanswered.

One of those question does find an answer at around the halfway mark as “Cogs” expertly stages the man’s exit from frame with the entrance of a figure in a poncho. Its imagery that echoes Yorgos Lanthimos’ The Lobster and winds up benefiting from the association. The similarities serve to expand the scope of the questioning surrounding the contained narrative of “Cogs”, while offering an outcome that similarly manages to become both definitive on a small scale and ambiguous on a much larger one.

Swirling around everything is the bruising maelstrom of “Cogs” itself, a barbed, punishing song that’s one of the band’s most tenacious offerings. Surging forward with a euphoric sense of clarity and purpose, “Cogs” injects its visual accompaniment with so much additional urgency that the clip feels as if its about to come to life. It’s a staggering accomplishment that’s utterly transfixing through every frame, from its unassuming opening to its startling grand finale. In short: it’s a masterpiece.

Watch “Cogs” below and pick up Minor Victories from Fat Possum here.