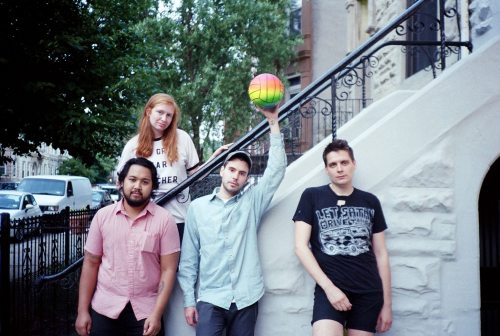 In the past week and a half a lot of full streams worth hearing have emerged, including titles from Feral Jenny, Ranch Ghosts, Lisa Prank, Sur Back, Stephen Steinbrink, Therm, CLAWS, Johanna Samuels, LUKA, Durand Jones and the Indications, Retail Space, and The Mystery Lights. Along with those there was also a Sundress Records compilation (Sunken Meadows – Vol. 1), a Vacant Stare compilation (Live From The Grassy Knoll Vol. 1), and a compilation from a long string of Kentucky-based musicians aptly titled We Have A Bevin Problem. Most importantly, that stretch of time also saw the release of Yes Yes A Thousand Times Yes/Fits, a split EP boasting two of today’s most promising emerging acts.

Yes Yes A Thousand Times Yes kick the proceedings off with the forceful basement pop of “Dad Got Me A Lefty Desk” that finds its strength in seamlessly alternating between razorwire breakdowns and propulsive, bass-driven main section. The vocals are impassioned and the band seems committed to sounding as menacing as their genre restrictions allow. The song’s over in two minutes and sets up “Mas and/or Menos” nicely, which opens with a tantalizingly off-kilter introduction before branching into the realms of disjointed post-punk. The band uses the spareness of the verses to their advantage here, injecting the chorus sections with an adrenaline that makes the track feel genuinely explosive; it’s a brilliant dynamic play that’s made all the better by “Mas and/or Menas” being, quite simply, a great song.

Fits waste no time on their side, kicking the transition off with “Fits”, which had a nice premiere piece over at Stereogum that dissected the band’s shockingly strong lineage (Fern Mayo, PWR BTTM, gobbinjr, Big Ups, and Museum of Recycling are all directly connected). Unsurprisingly, given the band’s pedigree, each of the songs on their side of the split are absolute triumphs. Sharp and sharp-witted, Cummins (who penned an extraordinary piece for the most recent crop of A Year’s Worth of Memories) leads their band through a trio of galvanized basement pop, never getting too cloy or too dour but always finding a way to effectively bridge the two.

All three of the band’s tracks on the split clock in at under 100 seconds yet land with such a fierce impact that they immediately register as complete entities worth even more than however many revisits they’ll undoubtedly earn. By the time “Why Did U @ Me” hurtles itself over a cliff and into some unknown abyss, Fits more than cement this split’s status as one of the very best of not just 2016 but of this decade. Everything on display here is a feat of strength and vision, ensuring both Yes Yes A Thousand Times Yes and Fits a discography entry that’s alternately inspired and inspiring. Hop on now and hold on tightly for what promises to be an exhilarating ride.

Listen to the split below and pick it up here.