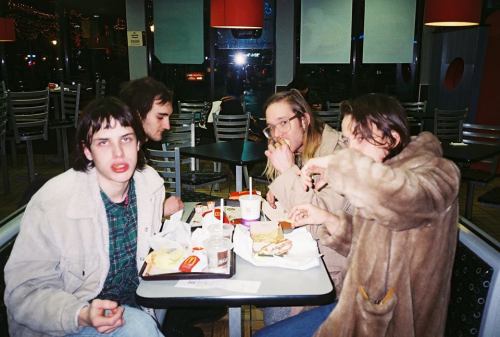 Only a short time ago, Frankie Teardrop announced they were calling it quits but giving the world one final record before they disappeared into the distance. In a way, it’s not too surprising; bands break up and move on with their lives all the time. Not a lot of bands have ever managed to release a record as powerful as Hell Yep which simultaneously serves as the band’s magnum opus, their swan song, and an exhilarating victory lap.

Everything about Hell Yep suggests that before they departed, the band was firing on every cylinder imaginable. Each of these final dozen songs resonates on multiple levels, produced perfectly and delivered with extraordinary conviction. Comprised of spiky, punk-tinged basement pop of the absolute highest order, Hell Yep is an invigorating listen despite the bittersweet extenuating circumstances (which, incidentally, may have ultimately provided Hell Yep with an even greater celebratory tone).

While the latter half of Hell Yep finds the band largely exploring their more experimental sensibilities, everything remains unflinchingly melodic and is executed to a weird perfection. At some point it becomes evident that the band was determined to go out on top, which tends to be a common goal. How flawlessly they executed their vision is both slightly unbelievable and extremely uncommon.

Frankie Teardrop’s final offering, the hard-charging “Waiting For You”, comes across as a natural conclusion; fiery, catchy, intelligent, dynamic, and ready for whatever comes next.

Listen to Hell Yep below and pick up a copy from the band here.