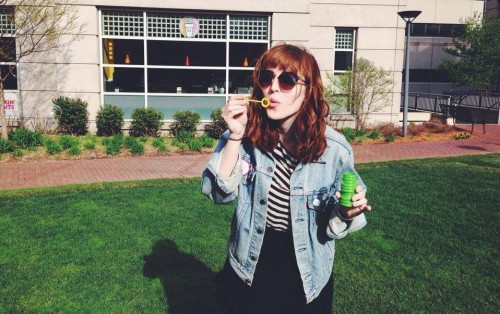 A while back, I came across the Basement Babes zine and was immediately floored by the work that was being done. Personal essays about feminism, challenges that still exist because of the arbitrary borders of sexism, and identifying as LGBTQ bled into coverage of Boston’s emerging artists. Smart, nuanced, and important, it’s only managed to get progressively better — and bigger — since its introduction. One of its co-founders, Jessica Leach, was kind enough to submit a piece for this series and zeroes in on how 2015 felt like a step in the right direction for inclusiveness while acknowledging there’s still a lot of work to be done. Read it below and make sure to support the artists who have, historically, been disadvantaged for reasons that don’t even relate to music.

It’s been an incredible year for music overall, but more so, I think, it’s been an incredible year for new voices. I feel that this year has been one of turning the mic toward others, to listening to stories that need to be heard. In admiring that progress, I feel a pang of insecurity. Since I started making this zine called Basement Babes, I’ve made it my mission to see as many female musicians as possible. To learn about all of them and surround myself with the positivity of women making art. I wonder, though, if that’s enough.

In this year, I’ve watched hundreds of shows with the same uncontrollable jealousy. I wish I could make my words loud. I wish I could shout them at crowds, unabashedly. I wish I could be unafraid to cry and stitch my heart to my sleeve. But I am removed. I am far away. I am invisible. I am one head of many, bobbing back and forth, seemingly lost in the music but actually caught in a frenzy of thought and hyper self-awareness.

I have been the girl standing awkwardly in front of the merch table, hoping I seem cool enough. Hoping I don’t say the wrong thing. I have once or twice been the girl behind the mic too, timidly thanking a basement of drunk kids for contributing to a scene that they may care less about than I give them credit for. Being the dutiful emcee to the real artists positioned behind me. Wishing I could give them more of myself but always stopped in my tracks by the anxiety of not being enough.

I make my zines and hope it’s enough. But I watch others with my jealous eyes, and I wonder if they’re feeling what I feel too. If they feel suffocated by the inherent competitiveness of music, of making space, of having your voice heard. I’ve been the girl in the basement at a punk show, knocked over by a man who’s far larger than I, whose carelessness comes from liquor and privilege. I’ve been the girl whose contributions were overlooked, whose presence was rarely acknowledged, dismissed as “probably just someone’s girlfriend.”

I’ve been one of so many girls who’ve encountered sexism in the DIY scene. I hear voices preaching “safe space” and “equality” but no scene is exempt from the poison of it. Boston’s scene isn’t somehow better than others. I am the girl who’s still watching her beer, who’s still listening to her friends talk about survival, who’s still hearing voices that describe fear.

I worry about giving enough, but I also worry about giving too much. I know that I am not alone, despite feeling alienated. I know that my story is still wrought with privilege, despite also being tarnished by disadvantage. But, I see how my peers have made it a mission to give me a space and hear my voice. So, in spite of fear, I am proud. I am proud of all the good things that have happened this year, in Boston and all over the country. I am beaming.

It would do all these accomplishments a disservice, though, to list them as if they were quantifiable. As if I could compare them side by side to other years, measure a time that was more progressive, more worthy of praise, than another. The point of progress is that its imprint is everlasting. The voices we’ve heard this year, whether in music or politics, that have indelibly made us better or worse, their effect trickles into the next year, and the year after that. Every moment in time is just a reincarnation of the one before it, and so I look forward, because all these moments in 2015 that I’ve so cherished are just waiting to be pushed on into a new year. So, 2016, you’re next. Do me proud again. Maybe someday I’ll feel like I am enough. But maybe it’s better if I don’t.

Filed Under: Uncategorized
Tags: A Year's Worth of Memories : Basement Babes : Jessica Leach : The Voices of 2015