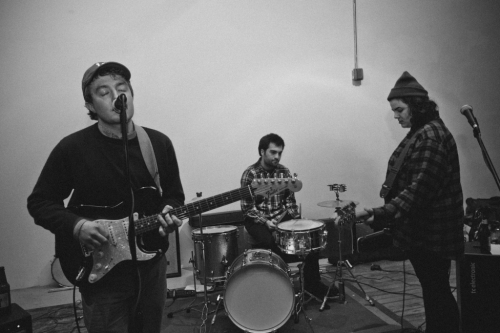 Today will be dedicated to two posts: the first (the one you’re reading now), will cover a large handful of yesterday’s notable releases while the ensuing entry will bring everything up to speed. While there wasn’t an intimidating excess of new material on Wednesday, like there has been in the past, it still managed to unearth some very strong pieces. Ms. John Soda had their tantalizingly light new single “Hero Whales“, Camper Van Beethoven’s willfully ridiculous Sharknado 3: Oh Hell No! song “Long Way To Go“, Doubting Thomas Cruise Control offered another compelling new look at their forthcoming record via “Soft Focus“, Blake Schwarzenbach provided a glimpse at his upcoming solo material with the quietly pulsating “Sanity Is Waiting“, and Donovan Wolfington maintained both their searing aggression and surprisingly light pop touch via “Solo Cup“.

For music videos, there was the menacing grit of Memory Pills’ “Beauty of the City“, Matthew E. White’s moving “Vision (No Skin Version)“, Jenny Hval’s dream-laden “Sabbath“, and Gem Club’s strangely harrowing “Braid“. The full streams wound up with incredibly strong representation from an individual release: Antarctigo Vespucci’s s debut full-length effort, the incredibly strong Leavin’ La Vida Loca. Today’s featured item circles back to the single song streams and strings together lackadaisical basement pop with punk attitude as well as anything else to have found release this year.

With the light drawl that hearkens back to the slacker pop of the 90’s there’s an obvious Pavement comparison to be made here, especially with the off-the-cuff lyrical delivery fully ingrained in Princess Reason‘s DNA but those comparisons can only stretch so far; Princess Reason deserve to be judged on their own merit, not be held to the gold standard of a genre iconoclast. “Your Divorce” is a smartly-crafted burst of outsider pop, making room for some entirely unexpected moments that elevate the song from being good to being genuinely memorable. It’s a rambling, ramshackle number that headlines a forthcoming 7″ with the kind of confidence and finesse that suggest this band’s in the midst of something that should secure them quite a bit of attention going forward. An unlikely, biting summer anthem for the romantically down-and-out “Your Divorce” may have a lot of roots in the past but it still manages to come across as a breath of fresh air.

Listen to “Your Divorce” below and pre-order the 7″ from Nebraskan Coast here.