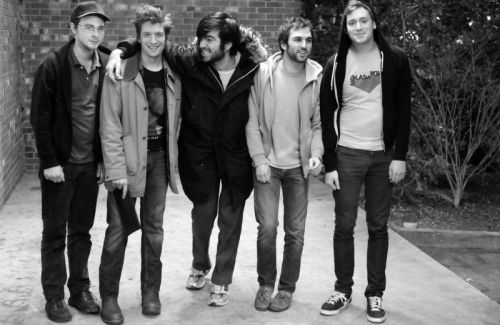 A small handful of great clips have managed to appear over the past few days. Those videos include Inheaven’s deeply unsettling “Slow“, Alabama Shakes’ gorgeous, 2001-indebted “Sound & Color“, TULA’s uncompromisingly stunning “River“, Toro Y Moi’s grocery store adventure “Lilly“, Lonnie in the Gardens’ stark, contrasting “Natasha“, Derider’s foreboding, effects-laden “Rusty Nail“, and The Teen Age’s grotesquely clever narrative experiment “Low Cunning“. All seven of those entries are fine examples of the format but today’s focus falls to an even more niche field: the lyric video. It’s difficult to make one that’s compelling enough to act as a standalone (the only two that immediately come to mind from last year are Lady Lamb’s “Billions of Eyes” and HDTV’s gloriously insane “Wrong Hole“) but Titus Andronicus prove to be more than up to the challenge with their clip for the characteristically frantic (and typically brilliant) “Dimed Out”.

Any band that creates a record on the level of The Monitor (i.e., an unimpeachable masterpiece) is going to have to deal with a career of heightened expectations. More than a few songwriters have buckled under that weight- but the ones that haven’t all share a similar quality: unerring ambition. Patrick Stickles belongs to that select group of perennially unsatisfied minds. And, yes, Local Business may have seemed diminutive in comparison to its immediate predecessor but it still held up as a complete, compelling work. For Stickles & co.’s forthcoming record, the stakes have been raised yet again- this time in the form of a double-album rock opera staged in five acts, The Most Lamentable Tragedy, that seems to hinge on a through-line that heavily reflects on identity and manic depression. The band’s assembled a murderer’s row of guests for the record, ranging from The So So Glos to Owen Pallett to Lost Boy ?, and just unveiled the surprisingly gripping Stickles-directed lyric video for lead-off single “Dimed Out”. Lyric clips are very rarely executed as well as Stickles manages here (the instruction manual section is particularly golden) and the whole thing’s teeming with the band’s uncontainable energy providing it with an extra jolt of headlong exhilaration.

Watch “Dimed Out” below and pre-order The Most Lamentable Tragedy from Merge here.