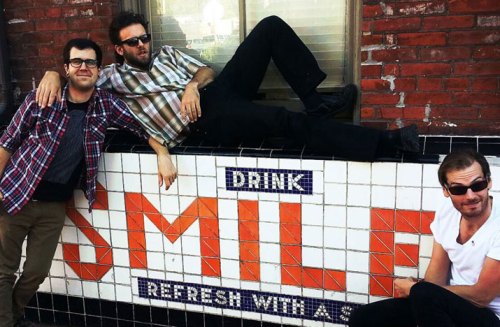 Chicago trio Mutts have been steadily building a deeply impressive resume for over five years. Each time the band steps up to the plate, they improve on their previous best- leaving 2013’s extraordinary (acoustic-based) Object Permanence as their current high-water mark. As unlikely as it seems considering Object Permanence‘s unfailing grace, the record they’re about to release- Fuel Yer Delusion vol. 4– may surpass it to take up the mantle of career-best. “Everyone Is Everyone” kicked off the pre-release roll-out for Fuel Yer Delusion vol. 4 in exhilarating fashion with bandleader Mike Maimone passionately dismantling the politics of negative slurs- a stance that takes on a much more personal meaning considering Maimone spent the last few records grappling with the anxieties and emotional releases that accompanied his decision to come out.

“Black Ties & Diamonds” may not be as fiery as its predecessor but it’s just as- if not more- immediately gripping. Easily the band’s most atmospheric moment to date, “Black Ties & Diamonds” is as fire-and-brimstone as it is smoky haze, a classically noir-ish retreat down a murky riverbank. It’s an entirely new look for Mutts and one that suits them so naturally that it’s easy to forget their standard mode is blistering blues-infused noise-punk. As always, Maimone’s lyrics and keyboard work are just as sharp as Mutts’ rhythm section (which is made up of drummer Chris Pagnani and bassist Bob Buckstaff, respectively)- adding to their easily posited claim as one of the tightest units in the upper Midwest.

In lyric copy, “Black Ties & Diamonds” becomes a total deconstruction of a myriad of events, eventually revealing itself as a collection of vignettes that illustrate the trials of life’s overwhelmingly mundane nature. There’s a melancholic nature permeating throughout the track, accentuated by organ stabs, mood-heavy drumming, and frighteningly intuitive bass work. Musically, this veers far closer to the realms of Nick Cave & the Bad Seeds than the usually inevitable Tom Waits comparison the band’s so frequently earned in the past. It’s a complete anomaly in the band’s catalog; a minor headphones track in a sea of turned-to-11 explosives.

Production-wise, “Black Ties & Diamonds is the best Mutts have ever sounded electric- something that holds true for the rest of Fuel Yer Delusion vol. 4. This is a record that’s layered, sequenced, and mastered to perfection, with “Black Ties & Diamonds” standing out as the definitive track. Mutts aren’t done experimenting, moving forward, challenging themselves, or progressing. Not by a damn sight. “Black Ties & Diamonds” cements this as inexorable proof in stunning fashion, playing directly into the commendable ethics of one of America’s hardest-working bands. Don’t be too surprised to see their name starting to fight its way into regular conversation- and don’t make the mistake of ignoring something as subtly haunting as “Black Ties & Diamonds”.

Mutts will be throwing an LP release party for Fuel Yer Delusion vol. 4 which will be presented by Gapers Block and feature additional performances from Archie Powell & the Exports, The Kickback, and Pop Goes The Evil. This will take place on December 6 at The Metro. 8 pm. $12 at the door and $8 in advance. Don’t make the mistake of missing this one.

Stream “Black Ties & Diamonds” below and make sure to pick up Fuel Yer Delusion vol. 4 as soon as possible.