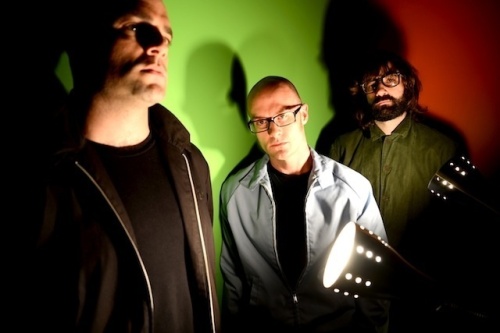 The members of Dark Blue could all likely be seen as institution of the Philadelphia scene at this point. Among them, Clockcleaner, Purling Hiss, Strand of Oaks, and Ceremony are all represented- but, most importantly, all of them used to play in the rightfully revered Puerto Rico Flowers, whose 7 is one of this decades better releases. However, during their time spent in Puerto Rico Flowers, it was still clearly spearheaded by John Sharkey III, whereas Dark Blue is a much more collaborative project which is rightfully being considered a band. Recently, they unveiled the brooding “Here On My Street”, evoking a very particular sound- one that many bands have tried their hand at but failed to get completely right, as Dark Blue do here.

“Here On My Street” is the first look at Dark Blue’s upcoming full-length, Pure Reality, which will be released on October 7 via Jade Tree. As mentioned, their are some striking similarities (which is unsurprising, given the circumstances) to Puerto Rico Flowers, though they only run so deep. There’s a greater emphasis on tension, restraint, and atmosphere than there was the last time these three shared a project that results in a sound not too dissimilar from Terry Malts at their most laid-back. Guitars surge through an ostensibly bleak soundscape and occasionally stray more towards the celebratory than defeatism, straddling the line between no-wave and new wave with terrifying precision. It’s a fairly foreboding piece overall but it yields spectacular results, pushing Pure Reality up several levels on the anticipation meter.

Listen to “Here On My Street” below and make sure to pick up Pure Reality as soon as possible.

2 Comments to “Dark Blue – Here on My Street (Stream)”