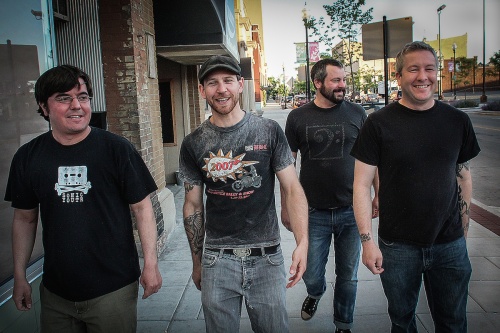 In 2012 Oshkosh quartet Haunted Heads quietly released their extraordinary self-titled debut, which saw the band perfect the niche they’d carved out for themselves. Mining territory not too dissimilar from The Wrens while injecting it with their own personal brand of impassioned post-punk precision got a lot of people in the area to turn their heads. Haunted Heads wound up being one of Wisconsin music’s best-kept secrets and the band set about to going through the motions of touring behind it and writing more music. Now, for the first time since that release, the band’s offered up one of their new songs, “VV”, which will be available on an upcoming self-titled 7″.

“VV” somehow takes everything that made the band’s debut work so well and strengthened it. It’s a refined version of an already great band that winds up maximizing their energy. While the band already, very arguably, had the best grasp on structural dynamics in Wisconsin, they take it to new levels here. Every palm-mute, snare blast, and buzzsaw riff winds up culminating in something that’s immediately engaging while also rewarding investment. “VV” is a taut tightrope of a song and the band continuously threatens to cut it to pieces themselves before exploding in a brief finale that should catapult their upcoming 7″ to the top of quite a few people’s “most-anticipated” lists.

Hear “VV” below and catch the band live whenever possible.