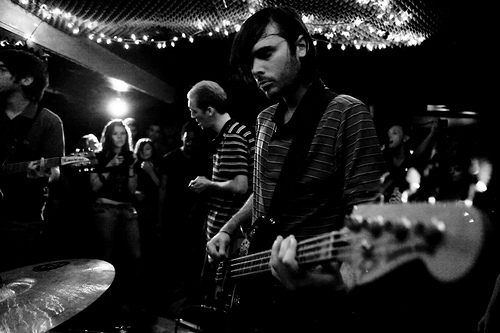 A few years ago, Royal Headache came barreling out of nowhere and struck with enough blunt momentum to create a crater that pulled a large handful of notable minds into their world. In the time that’s followed the release of their incredible self-titled record, they’ve managed to create a fascinating story by carving out their own epilogue and assemble what promises to be their finest release to date. Due out in August, High has already generated a significant amount of anticipation on the strength of its fiery title track (which is holding strong as one of 2015’s best songs). Those expectations get pushed even further up the spectrum with “Another World”.

In a week of some seriously extraordinary releases (see the list of links at the bottom for proof), Royal Headache once again managed to conjure up a true standout that sees them surging towards the barriers of their own perceived limitations and doing everything they can to dismantle them with sheer momentum. It’s their most tightly-crafted song to date, rife with memorable hooks and genuinely explosive moments. As a new song with an open future, it would have been exhilarating in its promise- as a part of the band’s extended death rattle (the band’s vocalist was allowed to depart under the conditions that he stay on to complete the record and the subsequent promotional tour), it’s unforgettable. Wild-eyed, manic, impassioned, and deeply felt, “Another World” is another peak for a band that will be leaving us far too soon- but doing so at the height of their powers, on their own terms, and at the absolute top of the mountain.

Listen to “Another World” below and pre-order High from What’s Your Rupture? here. Beneath the embed, explore a list of great songs to have surfaced throughout the week (if for some reason you’ve been doubting the overwhelming strength of this year’s release crop, remember that the below list is comprised of individual songs that all found release in the same week).

Before jumping into the songs that have emerged over the past two days (& in subsequent posts, the material that’s surfaced over the past week), I’d like to start by issuing an apology to anyone that’s checked this space expecting new material recently (and, in a way, to the expectations I set for myself). I’m in the middle of navigating a move from the middle of Wisconsin to Brooklyn, so coverage will be more sporadic than usual. Once the move’s been established, though, the landscape will be a lot more vibrant than it has been in the past; everything will even out eventually. I’m not here to dwell on exposition, though, I’m here to share the things- on this specific occasion, songs from the past two days- that caught my attention.

The Hussy’s “Appleseeds” provided a blistering reintroduction to one of Wisconsin’s best bands while “Bill Murray” continued theweaselmartenfisher‘s quiet output of the kind of brilliant writing that makes him one of the state’s best songwriters. There were a handful of artists that produced sterling ambient-leaning tracks, including MAS YSA, XYLØ, Ancient Ocean, and Sitcom while Tokyo Police Club member Dave Monks and  held down the mid-tempo terrain (with “The Rules” and “Slower Now“, respectively). Territory a bit more harsh was dominated by Infinity Girl, Dope Body, Buck Biloxi and the Fucks, and Empty Flowers. All of those songs, as always, are worth several listens, but this post’s feature belongs to the return of Royal Headache.

After unleashing one of the more impassioned debuts of recent memory, Royal Headache hit a snag. Their vocalist, Shogun, announced his intentions to quit the band. The rest of Royal Headache agreed under the stipulation that shogun stay to complete their second album. A tour’s forthcoming but at this point, the band’s living out an epilogue. If “High” is anything to go by, that epilogue may be more exhilarating than virtually all of the preceding content. I’ll admit, “Down the Lane” ranks among my all-time favorite songs (and Royal Headache will always have a valued place in my collection) but “High” doesn’t seem to be a static title; it’s a statement about the band’s creativity level while it extends its bittersweet death rattle.

“High” opens with an emphasis on a slightly cleaned-up production aesthetic, replete with swirling organs and a pulse-accelerating dynamic. Shogun launches off into what comes off as something approaching a mantra, providing an unavoidable clarity in regards to his feelings for an unnamed central character. As gritty as the verse winds up being, it’s when the chorus erupts into a full bloom that “High’ transcends genre limitations to become something genuinely breathtaking. Just as suddenly as it appears, the exquisite guitar work dissolves back into the pedal-to-the-floor hum of its verse sections. As it jumps back and forth, “High” establishes a surprisingly taut- and subtle- level of tension while simultaneously careening off into an otherworldly catharsis. It’s not just one of the band’s finest works; it’s one of the best songs of 2015.

Listen to “High” below and pre-order High from What’s Your Rupture? here.

With the entirety of yesterday’s post dedicated to Mitski’s miracle of a record, Bury Me At Makeout Creek, there’s quite a bit to catch up on today. There were a bevvy of single streams that included Le Rug’s blown-out rager “Dudley“, Ghastly Menace’s vibrant pop confection “Closing“, and The Dodos’ triumphant return single “Competition“. There was also a sprawling, punchy piece of anthemic open-road folk in the form of Small Houses’ outstanding “Staggers and Rise” as well as another look at YAWN bandleader Adam Gil’s solo project, Dam Gila, via “Home Again“. Rounding things out for the single stream category was a demo from The Guests (a new band featuring members of Sheer Mag), a typically bold Liars b-side, and a Girlpool cover of one of the most achingly romantic songs ever recorded.

In the realms of the music video there was an equally plentiful pool of treasures that included Diarrhea Planet’s oddly compelling fantasia in “Kids“, Metronomy’s stunning woodland-set magic surrealism in “The Upsetter“, and Spider Bags’ subtly nightmarish visual effects collage “Eyes of Death“. Additionally, there was Dream Generation’s stark “The Spirit of America“, She Keeps Bees’ gorgeous “Owl“, Owen Pallett’s inexplicably powerful “In Conflict“, and Corners’ masterfully executed “The Spaceship“. As if that wasn’t enough, the full streams that appeared over the past few days matched the rough output of both the single song and music video output with some truly outstanding efforts coming to light- like Caddywhompus‘ strong bid for Album of the Year contention with Feathering A Nest. The Paperhead emerged with their latest throwback-heavy gem, Africa Avenue, while Parkay Quarts built on their renewed buzz with the wiry Content Nausea. Open Wide released a demo of quietly stunning folk-leaning ballads, Ex Cops threw a darkly-tinted dance party with Daggers, The Jazz June resurfaced with some shockingly strong material in After the Earthquake, and Nots left burn marks with the scalding punk tantrums of We Are Nots.

All of those items are worth sitting down and spending time with but it was recent Carpark Records acquisition Chandos’ “..Pretty Sure it’s ‘Tang Top'” that gets today’s feature spot. It’s a vicious piece of sharp, 90’s-indebted punk, equal parts Acid Fast, PS I Love You, and Speedy Ortiz, “..Pretty Sure it’s ‘Tang Top'” flies along, never bothering to do anything but build momentum through its myriad twists and sharp left turns. Tempos shift, personality gets exuded, and Chandos (formerly Chandeliers) wind up with something that sounds as raw as it does inspired. On Carpark’s ridiculously impressive roster, Chandos falls somewhere between Cloud Nothings and Popstrangers, which is really just shorthand for saying that Chandos’ upcoming record- Rats In Your Bed– is well worth an extremely high level of anticipation. If “..Pretty Sure it’s ‘Tang Top'” is any indication, Chandos is in the midst of a creative peak that will likely yield the band’s strongest material to date. If everything clicks as well as it does in this song, Rats In Your Bed could very well be the first great release of 2015 when it’s released on January 27. Mark the calendar now.

Listen to “..Pretty Sure it’s ‘Tang Top'” below and pre-order Rats In Your Bed from Carpark here. 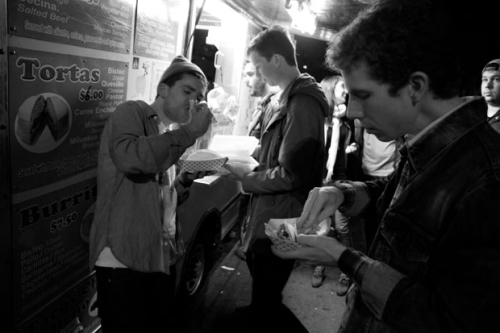 Yes, Sunbathing Animal is as good as everyone says it is. No, the band’s not reinventing any wheels but they’re one of the best at fully committing to the mechanics behind what makes them spin. Their minimalism has always been one of their strongest appeals and the way they use restraint is aggressive to the point of being abrasive- but it works. Everything somehow clicks in to this chaos that feeds off its own energy, like something that’s constantly trying to hold on to whatever life remains in a death rattle that never really comes.

One of Sunbathing Animal’s best examples of this is the infectiously ragged “Black and White”. True to its name, the video the band’s released for it is presented in grainy black and white footage. There are several pieces of what are designed to appear (and one that may actually be) found footage of pedestrians walking away from the camera that trails them on the New York street where vocalist Andrew Savage resides. By having their videos central figures firmly rooted in anonymity it nicely contrasts the fact that this was an in-house production; band members Austin Brown and Johann Rashid directed the clip. When the video finally reaches a conclusion, in an appropriate bit of subtle continuity, it winds up right where the video for “Sunbathing Animal” took place. Nice touch.