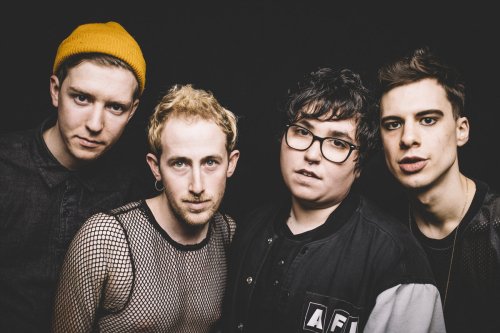 Consistently engaging and constantly intriguing, Alien Boy have been a name to watch for a while now and, if “If We Don’t Speak” is any indication, are preparing for bigger things. Not just in terms of audience but scope. Everything from the production to the arrangement style has been tweaked and “If We Don’t Speak” is comparatively towering over Alien Boy’s past releases (which remain worthy of investment). Here, the project bridges subversive pop-punk with shoegaze to an effect that’s genuinely startling.

A lot of bands in the past few years have been attempting to bridge those two genres but most haven’t come halfway close to the seamless overlapping that “If We Don’t Speak” contains. Washed-out reverb, punishing guitars, an aching melody, a bruised narrative, and a tenacious determination collide to elevate the sound to stratospheric heights that conjure a genuine feeling of awe. It’s a behemoth of a track that’s not content to just reach skyward, it’s one that successfully seizes the universe.

Listen to “If We Don’t Speak” below and pre-order Sleeping Lessons from Tiny Engines here.

Cayetana have been making a major push recently after developing a reputation for themselves based on the strength of their live show and incessant touring. Recently, the band went on tour with The Menzingers who also brought along site favorite Lemuria and PUP, raising their profile- and expectations for their new material- to staggering heights. If that pressure was weighing on the band, it doesn’t show- the first glimpse they’ve offered at new material, “Scott Get the Van, I’m Moving” is an exhilarating leap forward for a band that seems ready for national attention.

Boasting one of the catchiest vocal melodies of the year, the song’s a super-charged blast of basement pop that sounds both completely unhinged and gleefully effortless. Cayetana appear to be in full control of their craft, which bodes well for Nervous Like Me (due out September 9 on Tiny Engines), which “Scott Get the Van, I’m Moving” is taken from. Veering back and forth between an insanely fun sugar-rush during the verse and a decidedly more contemplative (and somber) passage offers up a contrast that keeps the listener on their toes and keeps the song fascinating. It’s an extremely tantalizing first look at Nervous Like Me and will be whipping audiences into a frenzy for as long as it’s played.

Listen to “Scott Get the Van, I’m Moving” below and keep both eyes peeled for Nervous Like Me.