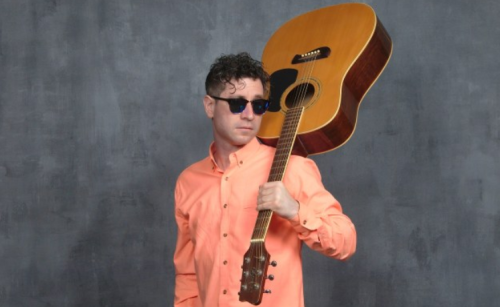 Once in a rare while, a singer-songwriter steps out of the boundaries of their main vehicle to take on an a more layered identity. Artists constantly branch out to explore other avenues of music, whether it’s a new band or simply a genre shift. Richard Spitzer’s name belongs on that list. Spitzer’s project Loveskills found the songwriter creating largely introspective electro-pop in the vein of acts like Hot Chip, only suffusing the project with a more club-leaning bent. Recently, Spitzer decided to temporarily put that project on hold to release music under his own name, announcing the change with the lovely “Synthesizer.”

In a little over 100 seconds, Spitzer proves to be a deft songwriting talent, crafting a warm, funny ode to the instrument that enlivened so much of his previous project. Acoustic guitar and vocal overlays comprise the entirety of “synthesizer” (not a synth in earshot) and Spitzer somehow manages to recall a swath of admirable lyricists in the song’s short runtime: Sufjan Stevens, Stuart Murdoch, Sean Bonnette, and Owen Ashworth among their ranks. Each of those artists have navigated similarly indie folk-friendly territory with sincerity, humor, and grace, which Spitzer matches here, creating an indelible impression. For as much as he clearly loves the instrument and its capacity to create enormous soundscapes, we should consider ourselves fortunate he’s taking some time away to create something that’s both refreshingly familiar and intriguingly new.

Listen to “Synthesizer” below and keep an eye on this site for further updates on Spitzer’s upcoming self-titled record, which is due out July 19.