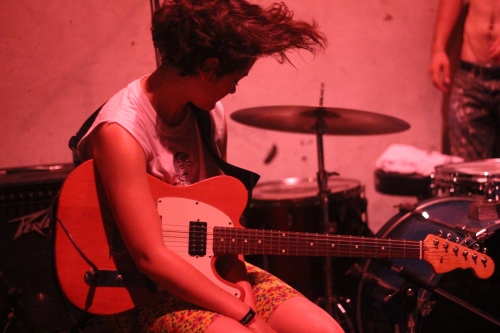 And the hits just keep on coming. While Wednesday was packed to the gills with great new content, today’s haul may make it look slim in comparison. A few music videos made their marks and included the likes of Cotillon’s hazy “Convenience“, Julia Holter’s tender “Feel You“, and In Tall Buildings’ deceptively intuitive “Flare Gun“. Full streams made just as strong of an impression through incredible demos from Dan Webb & the Spiders and Chondria, while Seulah and Bad Bad Hats capped off the format’s Thursday run with a pair of intriguing long-players (Phase III and Psychic Reader, respectively).

As for single streams, the week managed to get even stronger via the staggering amount of genuinely great new songs that were made publicly available. Yuck sounded reinvigorated on “Hold Me Closer“, Wild Moth revealed a set of ever-sharpening teeth with “Buried“, Le Tour embraced their most eclectic sensibilities in “Friend“, and Long Limbs gave Art Is Hard another notch in their white-hot winning streak through the release of “Past Tense“. Heaters continued to dive down the nightmarish psychedelic rabbit hole they’ve been traversing in “Propane“, FUR struck the perfect balance between power pop and indie pop with the charming “Creature“, Glass Vault produced some compelling dream pop with “Sojourn“, SOCIETY released the transcendental, genre-demolishing “Protocol“, and James Elkington & Nathan Salsburg’s ethereal acoustic duet “Up of Stairs” ensured the day was packed with intensive listening.

While, as always, all of those titles hyperlinked above are worth the traveling that accompanies a click, today’s feature (once again) falls on two familiar faces: Diet Cig. Alex Luciano and Noah Bowman already made a strong impression with what proved to simultaneously be one of the most hyper-charged and carefree releases of 2015, Over Easy, which has continued receiving attention and picking up accolades as time surges forward. Now, they’re set to capitalize on that momentum with a just-announced 7″ that’s headlined by “Sleep Talk”.

Guitarist/vocalist has always reveled in a blunt honesty that’s delivered with a coy wink and the opening lines of “Pillow Talk” provides that approach with an ample spotlight. As a narrative wind-up, those insights quickly slide the scale from sly to scathing until the moment of truth hits, accompanied by a frenzied burst of downstrokes and power drumming. It’s a moment of self-acceptance that feels like it’s bordering on catharsis, underlined by the couplet that toppled the breaking point: “Only here under obligation/it’s hard to pretend this is a vacation.”

What follows is a surprisingly wrenching tale of self-exploration that’s anchored in the ruins of a relationship. Just as a charging middle section seems like it’s threatening to speed off into a reckless oblivion, “Sleep Talk” scales itself back for an absolutely gorgeous final figure. Luciano’s vocals are overlayed to provide a slightly unsettling (but frighteningly compelling) chorus effect as a bed for the most expressive and refined guitar playing of Diet Cig’s (admittedly limited) discography to date.

It’s a genuinely stunning moment in a great song that suggests Diet Cig may have much bigger things in store for the horizon. As the last refrain of “If I told you I loved you/I don’t know who/it would scare away faster” comes cascading down, it becomes very clear that “Sleep Talk” isn’t just going to stand as a defining moment in the emerging band’s career but as a deeply personal monument to a lot of people harboring varying levels of insecurity. This is damaged romanticism at its absolute finest and yet another perfect example of why people should be paying even closer attention to a band that’s not even close to getting their due.

Listen to “Sleep Talk” below and pre-order the 7″ from site favorite(s) Father/Daughter (in conjunction with Art Is Hard) ahead of its September 18 release date here. Beneath the embed watch a live clip of the duo performing the records B-side, “Dinner Date”.

A Brief recap at the top: over the past week and a half I’ve been preparing for a move from Wisconsin to New York, collecting songs as they appeared. Fifteen of the finest from that stretch will appear beneath the embed of the featured song; Girls Names’ “Reticence”. A wiry post-punk number that takes a hairpin turn into something a lot more full-bodied than the opening guitar figure would suggest.

What follows is a brutally unforgiving run through a desolate atmosphere before veering into a sharp left and tapping into outsider pop that leans heavily towards a new wave tendencies. As that section blooms into something otherworldly it refuses to stop unfurling, laying itself out in a tantalizing sprawl before getting cut off at the head. With next to no warning, the track reverts back to the bleak, foreboding section that dominated its first half. As an exercise in dynamics, it’s stunning. As a teaser for the band’s upcoming Arms Around A Vision, it’s enough to elevate the anticipation into the stratosphere. As a standalone song? It’s damn near miraculous.

Listen to “Reticence” below and pre-order Arms Around A Vision from Tough Love ahead of its October 2 release here. Beneath the embed, explore a list of 15 other highlights from the past week and a half. 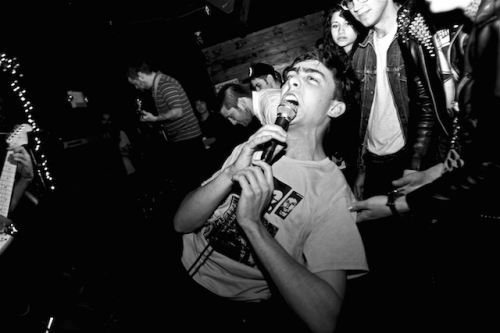 A lot of great material was ushered forth over the past week and the lion’s share of the great items to find promotion or premiere were songs. Destroyer swung for the fences and connected emphatically with the massive “Dream Lover“, Bad Bad Hats balanced sweet with spiky in “Shame“, Porcelain Raft conjured up another alluringly atmospheric dreamscape with “Half Awake“, and Adult Mom hit a career peak with the reactionary, synth-laden “Survival“. Institute take the feature spot for this batch of songs thanks to a sprawling behemoth of a track entitled “Cheerlessness”.

Institute have been kicking away in Austin, TX for quite some time now and, thanks to their determined scrappiness, recently signed a deal with the vaunted Sacred Bones. They recently announced their first effort for the label, Catharsis, and provided a track along with the announcement. That song, “Cheerlessness”, is a relentless four-minute post-punk monster. Embracing all of the elements that make the genre so fascinating (tension, dynamic shifts, a bleak cynicism, sly subtlety, etc.) to create something that still manages to come across with a new, fully-formed identity is impressive. More impressive is the levels of conviction in display in “Cheerlessness”, from the instrumentation to the vocal delivery. Every punch the band throws hits its mark with enough brute force to leave a reverberating warning: we’re all in for one hell of a reckoning once Catharsis arrives.

Listen to “Cheerlessness” below and pre-order Catharsis from Sacred Bones here.