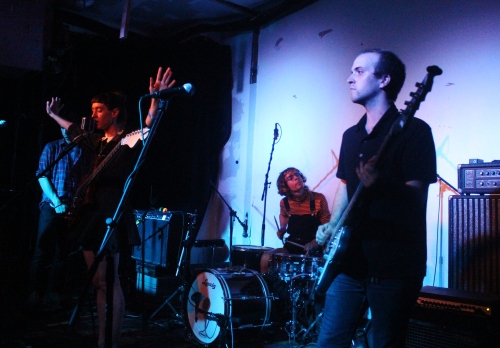 I don’t know how this site has gone 650 posts without ever giving a headline slot to Eskimeaux, whose phenomenal 2015 effort– the coyly titled O.K.— has been in near-constant rotation over the course of the past few months.  Gabrielle Smith’s Epoch project has appeared on this site a handful of times and even led off the recently published fall mix. Sooner or later something was bound to crack the feature-less streak and today it arrived in the form of a casually brilliant music video. While the medium did have a fairly strong week, it was the clip for “Broken Necks” that wound up here for reasons that skewed both objective and subjective.

Objectively, it’s a work of technical brilliance from House of Nod, who continue to impress while operating on an exceptionally high tier. Crisp editing (the stop motion is particularly enjoyable), gorgeous visuals, measured pacing, & committed performances all heighten an intentionally loose narrative that capitalizes on the song’s curious exuberance while still carving out space for its inherent bleakness (something that’s punctuated by Smith’s surprisingly capable deadpan moments). Accentuating that whimsicality are the several mini-sequences that play out like gifs, a move that could have proven too twee had it not been effectively balanced out by some astoundingly graceful long shots.

On the subjective side of things, this is a video that illustrates several of the things I love about the place I’ve come to call home for a little over a season. As run-down as it can seem, New York City (and especially Brooklyn) readily facilitates art. It’s evident in everything from the structural layout of the buildings to the graffiti that adorns their walls. For the lack of a better term, there is a strange sort of magic that the area carries, something that’s been heightened by its residents. A lot of the locations that were used in this video have come to have very significant meaning to me and I consider myself fortunate to know a handful of the people involved in the project on both sides of the lens. In that sense, not only does it succeed on its basic functions but it also operates as a living document of a specific place in time.

With all of the reasons listed above infused into one 207-second presentation, “Broken Necks” can’t help but feel (almost excessively) vibrant. It’s the perfect companion piece for O.K.‘s dueling emotional modes and a strong showcase for both Eskimeaux and House of Nod. By virtue of being so thrillingly alive and refreshingly original, “Broken Necks” surpasses merely being notable and draws closer to being unforgettable. A charming and remarkably endearing showcase of wit, composition, and genuine talent, it deserves as many views as possible.

Watch “Broken Necks” below and pick up a copy of O.K. from site favorites Double Double Whammy here. Beneath the music video watch a live performance of the song. Underneath both clips, explore a list of other great music videos to find release this week.

A lot can happen over the course of two days. Bringing an already stacked run of days to a close, Thursday and Friday continued to unearth a wealth of gems, including a trio of strong records from Naomi Pop, Funeral Advantage, and Gold Class. No less than 16 great new songs emerged from a variety of acts including Salad Boys, Laura Stevenson, SPORTS, Josh Ritter, Field Trip, Ricked Wicky, Adir L.C., Boys, Chris Walla, Ghosts In Pocket, Psychic Handshake, Cœur de pirate, Mos Def (ft. Ski Beatz), Speedy Ortiz (covering The Cardigans), Shunkan, and Destroy This Place. Music videos made a strong impression as well, with outstanding new clips from Diet Cig, Alex G, Worriers, The King Khan & BBQ Show, DRINKS, Flowers of Evil, Ali Barter, and A Place to Bury Strangers. On top of all of that, the run of days also yielded another look at PWR BTTM’s extraordinary forthcoming record, Ugly Cherries, by way of “West Texas”.

Over the past three months, PWR BTTM have gone from a quick few mentions on this site to being one of its most celebrated featured acts. A lot of that can be traced back to the band’s incendiary live show but most of it has to do with the fact their recent songs have been nothing short of astonishing. The band’s upcoming full-length debut, Ugly Cherries, already had one of the years best songs (the record’s title track) released to kick off the rollout campaign and now it’s being followed by the equally powerful “West Texas”.

All of PWR BTTM’s usual characteristics are on display throughout the song, from the inventive structures to the sharp playing to a lyric set that pushes honesty to a level that feels defiantly confrontational. Benjamin Hopkins and Liv Bruce trade vocal leads with a fluidity that betrays the duo’s already uncanny connection and the song makes the absolute most of its runtime, landing every blow it throws with a vicious intensity. Harmonic riffing, power drumming, and a bevvy of immediacy help make “West Texas” a standout track but, as is nearly always the case with PWR BTTM, their melodic and lyrical sensibilities push this into a realm that not a lot of other bands have even attempted to occupy. Sardonic, sincere, and singular, it’s another perfect example of why PWR BTTM deserves as much conversation as possible.

Listen to “West Texas” below and pre-order the record from Father/Daughter and/or Miscreant ahead of its September 18 release. Beneath that, watch a video of the band performing the song (along with “Short-Lived Nightmare”) at Shea Stadium.