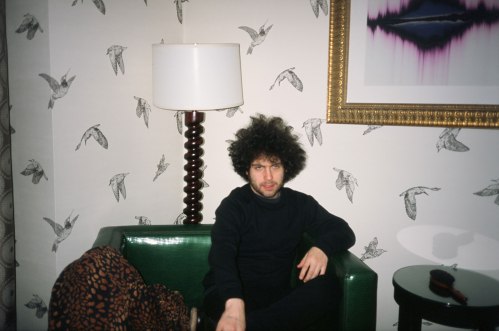 More than a dozen great new songs found their way out into the world at large today, which seems as solid of an example as any to point out that the early running of 2016 has yielded an overwhelming amount of outstanding material. 13 of those songs came from Try the Pie, NOTHING, Boys, Amber Arcades, Your Loss, Hanni El Khatib, Mike Adams at His Honest Weight, The Moles, Harmony Tividad, Youth In Bloom, Earring, Hestina, and MONEY. While all of those titles, as always, deserve as many plays as they can possibly receive, it’s a song that I’ve been playing to death for the past month that gets the spotlight here.

Before going any further, I’d like to sincerely thank the good people over at Good Cheer Records for patching along an advance copy of Mo Troper’s essential Beloved because it’s practically all that’s been played ever since it landed in my inbox. Easily my current front-runner for Album of the Year, it perfectly blends the most enticing elements of Big Star, Weezer, The Replacements, and Tony Molina. It’s an insane reel of highlights (something that was likely evidenced in the write-up for “First Monkey In Space” in this site’s 50 Best Songs of 2016’s First Quarter list) but none of them are as strong as the soaring, battered “Star Wars”.

Both a scathing critique of the persistent, embarrassing bro culture and a celebration of the escape that can be found in the titular film, “Star Wars” hits hard in its narrative. Unflinchingly honest and remarkably huge, “Star Wars” is also a triumph in composition. Everything on Beloved incorporates decades worth of DIY punk history and wraps itself in a decidedly pop-leaning package. From the scrappy production to the monstrous hooks, each song could be considered a victory lap for an all-too-frequently overlooked genre. It’s a sentiment that holds especially true for “Star Wars”.

Beloved‘s a record that’s dominated by swing-for-the-fences selections and all of them connect, with “Star Wars” connecting the most emphatically. Blending tongue-in-cheek humor with impassioned feeling can frequently be an awkward blend but it suits “Star Wars” modesty to a tee. “All of my friends/are total fucking bros/wax museum/puppets with their strengths exposed” Troper bellows at the start of the final chorus, injecting his disdain with well-placed humor and a startling amount of intellect (which is another one of Beloved‘s strongest qualities).

Every single second of “Star Wars” is pure bliss for anyone who has even a passing interest in DIY punk, basement pop, or sloppy rock n’ roll. It’s exceptional songwriting that’s as thoughtful as it is catchy, lending an extreme amount of substance to something that could’ve succeeded without the impressive amount of care “Star Wars” winds up displaying. With a vocal melody that has legitimate staying power, a relatable message that resonates, scintillating guitar work, and a powerful turn-in from the rhythm section, “Star Wars” is an unstoppable force.

In the end, no amount of anger, dejection, or hopelessness can’t be at least somewhat remedied by the comfort of an old film. It’s a strange truth that a lot of us learn the hard way before recognizing the depths of escapism’s value. Mo Troper’s got it figured out, though, and now that truth has a fiery anthem as a welcome accompaniment. If there’s any justice, 39 years down the road some kid will be finding that escape by turning on this very song, which more than deserves to share its title with an old classic.

Listen to “Star Wars” below and pre-order Beloved from Good Cheer here.