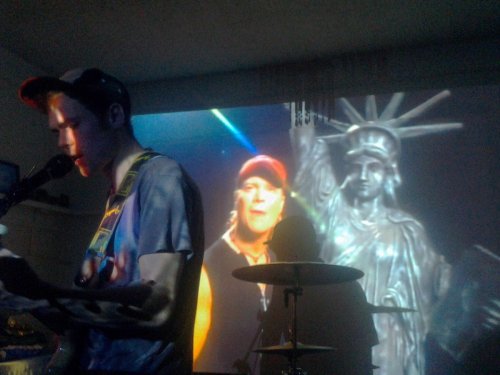 Nathan Tucker’s Cool Original project, through all its permutations, has earned quite a bit of love from this site. Nothing the project’s accomplished so far matches the scope of what’s achieved on I Never Said I Didn’t Care, a towering testament to personal and artistic growth. A little sludge, a lot of pop, and a fair share of basement punk coalesce into something that’s gripping from the outset and progressively more engaging as the record’s values become clear.

Towering in a peculiarly unassuming way, I Never Said I Didn’t Care finds Tucker and company cranking up the volume and confronting some harsh truths head on with a clear-eyed resolve (the “we don’t want the same things” realization in “Offended” is equal parts heartbreaking and emboldening). While the thematic through-line doesn’t shy away from complication, the composition that sustains I Never Said I Didn’t Care is some of the project’s most fierce and direct.

As the record progresses, Cool Original embrace a ramshackle existence and then blow it to smithereens in favor of something more subtle and rewarding: self-acceptance. In this case, that self is one keenly aware of hangups and has a penchant for larger-than-life distortion-heavy anthems that pay tribute to resilience. Inspired and inspiring, I Never Said I Didn’t Care makes its title abundantly clear in just about every way: this is a record that cares, deeply, about everything- and the record’s all the better for indulging in that trait. A high water mark for one of today’s most consistently excellent projects. Don’t let the year end without grabbing a copy.

Listen to I Never Said I Didn’t Care below and pick it up here.

A quick name change from Cool American to Cool Original preceded the project’s latest run of tracks and subsequent record, I Never Said I Didn’t Care. One of the highlights from the advance run of singles ahead of its release was the serene “Not Like That”, which foregoes urgency for tranquility and stands as one of Cool Original’s most transfixing moments to date. Impossibly lovely and surprisingly delicate, “Not Like That” shows off a more tender side of the project, adding even more depth and dimension to an already intriguing act. Four minutes of glimmering beauty and damaged romanticism, “Not Like That” is nothing short of breathtaking.

Listen to “Not Like That” below and order a copy of I Never Said I Didn’t Care here.