While the past week has been, by and large, dedicated to live coverage (a knock-on effect of moving  to a city that hosts multiple shows a night), I’ve still been keeping a wayward eye on both the present release cycle of songs, records, and live captures. It’s the latter category that this post, the 83rd installment of a series that celebrates some of the week’s best live footage, will use as its focus. As usual, there were more than five entries to be considered for a final spot and the clips that didn’t make the cut aren’t worth ignoring, either. So, when you’re done with the feature videos, double back and check out some recently posted performances by Advaeta, Izzy True, Painted Zeros, The Tallest Man On Earth, and Gianna Lauren. Until then, sit back, adjust the lighting to your preference, turn the volume up, lean in, and Watch This.

Mikal Cronin, now three records into what’s proving to be an astonishing solo career, has a legitimate claim at being one of this generation’s finest pop songwriters. While MCIII didn’t quite reach the heights of perfection that its immediate predecessor managed but it was compromised of several golden moments, nonetheless. One of those moments came in the form of “Say”, which Cronin and has band dive headfirst into here for WFUV, perfectly capturing that fleeting moment of uncertainty before being consumed by the feelings that accompany any notable dive, jump, or other drastic action.

One of this year’s more intriguing breakout acts, PINS have been making the most out of their newfound attention. They’re delivering at seemingly every opportunity, this KEXP session most certainly included. A jagged band with intriguingly sharp edges, they’ve made no qualms about embracing post-punk’s inherent rawness. In four songs, they manage to fully establish their identity and will more than likely wind up with a few more converts on their hands.

At this point, Hop Along‘s on this list more often than not and close to all that can be said about their live show has been said in this column already. Here, they get to experiment with stripping back ever so slightly for NPR’s Tiny Desk Sessions series and the results are predictably stunning. Frances Quinlan’s vocals are given even more emphasis but the music’s intrinsically gentle qualities are also given the opportunity to be maximized, capitalizing on a dynamic that suits the band to quiet perfection. As usual, it’s a performance that’s not worth missing.

Joey was one of 2015’s most welcome surprises back when it was released (and maintains that position now). In that record’s penultimate track, “All Meanness Be Gone”, nearly every aspect of Joey‘s identity-intensive narrative is spun together in a tapestry that’s as devastating as it is heartening. WMUA recently had Douglas in for a solo acoustic session that included a heartfelt performance of the song, one of the year’s best, which can (and should) be seen below.

At this point the heap of bands fighting to distinguish themselves from each other that operate in the middle ground between traditional post-punk and shoegaze is so expansive that it’s nearly impossible. No Joy manage to make it look effortless in a commanding KEXP session that sees them playing songs old and new. Occasionally muddled but never murky, these four songs present No Joy as an unlikely powerhouse who are clearly ready for bigger stages. Heavy, uncompromising, and ultimately exhilarating, it’s both KEXP and No Joy at their absolute finest. 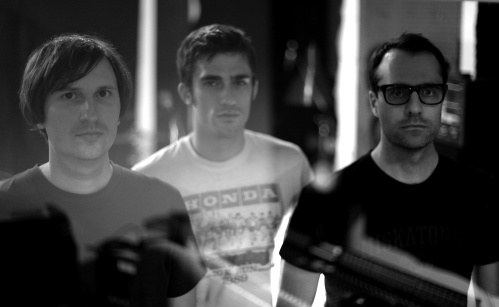 Occasionally there are days when the floodgates open and all that you’ve managed to miss over the past few weeks swarms its way into the surging current. Today was one of those days. More than 30 great items materialized, spread across all of the usual formats (although the vast majority were single stream entries). Full streams found life via great records from Crosss (LO), Pinecones (Sings For You Now), Porcelain Raft (Half Awake), Hex Dispensers (III), and Flesh World (The Wild Animals In My Life). Music videos had a strong year sustained with a fascinating crop of new clips that ranged from tongue-in-cheek (Mikal Cronin’s “Say“) to the epic sprawl found in Yak’s “Smile/Distortion“. The list of stunners in between included the following: Django Django’s “Shake and Tremble“, Elacampane’s “Out of Control“, Swiftumz’s “Take The Gray“, Toby Goodshank’s “Baby I Feel Like I Just Got Cut In Half“, Blue Smiley’s “Warn“, and Karen Meat & The Computer’s “Pizza & Beer“.

For the full songs, things picked up considerably and produced a particularly fierce onslaught of new material. That being the case, they’ll simply be listed and linked. All of these deserve so much more than just those direct mentions but this time around, there are simply too many. If anything, that should serve as strong evidence of 2015’s continued kindness. To wit: Daddy Issue’s “The Bruise“, Dead Stars’ “Calm Punk“, C-Duncan’s “Garden“, Little Racer’s “Jack Knife“, Mammut’s “Blood Burst“, Kid Wave’s “Honey“, Wing Dam’s “House Boat“, The Good Life’s “Everybody“, PINS’ “Molly“, Girlpool’s “Cherry Picking“, Angelo De Augustine “If I Could Fly“, Two Inch Astronaut’s cover of Taylor Swift’s “Fifteen“, Zachary Cale’s “Sundowner“, Dog Party’s “Sapphires“, Ecstatic Visions’ “Astral Plane“, Oberhofer’s “Memory Remains“, Sorority Noise’s “Nolsey“, No Joy’s “Hollywood Teeth“, The Cairo Gang’s “Ice Fishing“, and EZTV’s “Trampoline“. There was also the return of Radioactivity that took the shape in the form of the fiery “I Know”.

One of the first posts to ever run on this site was a review of Radioactivity’s incredible self-titled debut, which was easily one of 2013’s best records. Radioactivity felt like a continuation of The Marked Men’s Fix My Brain, an indisputable genre classic from The Marked Men, the band that mostly comprises Radioactivity. Two years later, the band’s back in full swing and has “I Know” to lead their charge. Much like Fix My Brain and Radioactivity, “I Know” is a snarling burst of pop-inflected basement punk. Guitarist/vocalist Jeff Burke continues to operate at an exceedingly high peak, offering one infectious melody after another. By the time “I Know” careens towards its finish, it’s almost as if Radioactivity never took their foot off the pedal after their debut, creating something as memorably urgent and accessible as each members’ finest outings. With June 30 only just around the corner, we’ve got some time to brace for impact- and it’s a recommended strategy- because Silent Kill is coming at full force and it’s not slowing down for anybody.

Listen to “I Know” over at Billboard, who premiered the track, and pre-order Silent Kill from Dirtnap here.