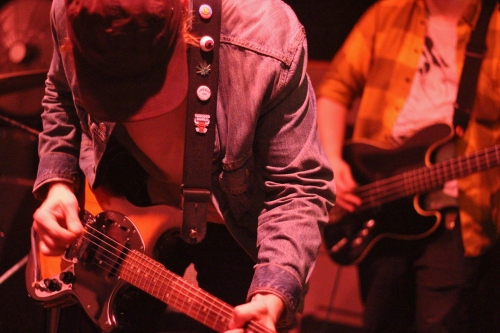 Between June and August, an avalanche of great songs came crashing down into the world. From genuine song of the year contenders (Big Thief‘s “Not” chief among them) to bands striking gold multiple times (Lauran Hibberd, Pom Pom Squad, Kal Marks) there was a lot to consume. Here’s a playlist of the best of best, presented with no extra fanfare. All of these selections are bold enough to stand on their own.

In the final segment of the Watch This revival spread, the focus — as it was in part three — continues to be placed on sessions that deserving artists did for quality outlets. Only this time around, the sessions aren’t encompassed into one video, they’re sliced up into individual clips, which have been strung together here for the sake of expediency. While the video counter may show a very intimidating 71 for the amount of videos featured, it’s really only 25 performances (with most being only two or three songs overall). Even if it’s unlikely that someone will find the time to watch through every last one of these clips, there’s an equally likely chance that someone may wind up finding a new favorite band or song. All of it’s worth exploring to a great extent and each clip — and performance — deserves praise. So, as always, sit up straight, adjust the settings, take a deep breath, lean in, focus, and Watch This.

Before the long weekend gave us all a nice reprieve, there were music videos to peruse after being released by Blowout, Fascinations Grand Chorus, Yung, Nick Waterhouse, Hockey Dad, Yumi Zouma, and Bat For Lashes. There were also some excellent full streams that emerged and came courtesy of IAN SWEET, The Pooches, Ratboys and Dowsing, Adam Torres, Sneeze, Natural Sway, Tough Tits, July Talk, Dennis Callaci, Yohuna, Allah-Las, Shapes In Calgary, and the miami dolphins. As if all of that wasn’t enough, there was also an incredibly endearing clip from Proud Parents that found its way out into the world.

The band’s got an impressive pedigree among its four members, who are all connected to other prominent projects in the Wisconsin DIY punk circuit. All of that experience — and the knowledge that’s gained via that experience — has shaped Proud Parents into one of the finest basement pop acts in the upper Midwest. A lot of that’s been gained through an open-hearted identity that’s on full display in “Take My Hand”.

A staunchly independent endeavor, “Take My Hand” has a charmingly simple conceit: ramble around, mouth the song, and play with a small army of dogs. By forgoing a more ambitious narrative in favor of something far more grounded, Proud Parents are able to create a compelling hangout clip that remains an absolute joy even after a handful of plays. In playing to their strengths, “Take My Hand” emerges as a definitive portrait of a band that’s more than ready to get their considerable due.

Watch “Take My Hand” below and pick up Sharon Is Karen here.

As was mentioned in the last post to run on this site, Watch This — the (usually) weekly series celebrating the very best in newly-released live video presentation — experienced an extended hiatus in the wake of incessant traveling and the frantic catch-up mode that traveling necessitated. Over the course of the next week, there’ll be a small handful of collections to get the series back on track.

The collection below contains 25 of the best full sessions released over the past month and a half. KEXP, Audiotree, and NPR (understandably) dominate the selections as they’re all operating at a gold standard level for full session presentation. The final result is a compilation that features an arsenal of site favorites and nears the 11 hour mark in running time. To that end, it’s likely best viewed in small bursts so a page bookmark is recommended. Everything, in true Watch This fashion, is worth seeing (and hearing). So, as always, sit up straight, adjust the settings to your preference, and Watch This.

In keeping with the past several recap posts, a lot of material will be listed below. I wish I could have granted each of these individual songs more words than just a generic introductory paragraph extolling their high quality of work but time can be extremely cruel and leave few desirable options. March was an extraordinary month for music, if you knew where to look and could spare the investment. Below is a list of the individual streams that surfaced during the month, each one worth several looks.

Once again, there’s simply too much material to consume in one sitting so this page is best experienced via a bookmark and return explorations. Following this post, the site will be running a premiere or two and then lists of the very best streams and live videos of 2016’s first quarter but until then, taking a trip through the below titles should be a rewarding experience that keeps everyone occupied. You may even find a new favorite band. Happy hunting.