The Very Best of the Very Rest: The Best Full Streams of 2017’s Final Stretch

Making one last recap run before the year-end lists go up, now that the year has officially expired, this post will serve solely to focus on the most exceptional records to come into focus over 2017’s final stretch. Often, these records get overshadowed precisely because of the competitive spotlit-nature of those year-end lists. More times than not, this batch of records also — much like Oscar season in the realm of film — contain the records labels hold back in hopes they’ll still be fresh in people’s minds while compiling those lists. Ignoring those for smaller releases that come across like distant memories can be harder than most think, which is why the below selections cater to the records that would have earned themselves serious year-end consideration no matter when they were released. So, make sure these are queued up to their opening track and listen to 21 records that don’t just deserved to be played, but remembered.

Fits – All Belief Is Paradise

The Miami Dolphins – Water You Waiting For

Heavy Pockets – (Don’t Wanna Be) One of the Boys (Stream) 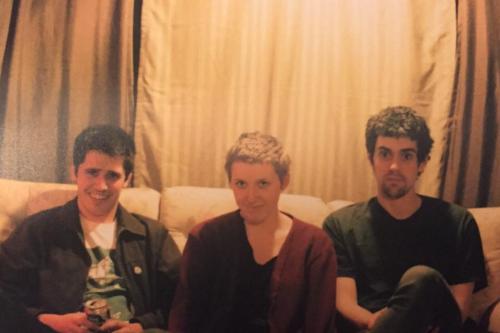 This week got off to a strong start with impressive new tracks from Communist Daughter, Lost Boy ?, Emma Ruth Rundle, Boy Scouts, Goon, Lee Fields & the Expressions, The Royal They, Mono, Cyrus Gengras, and Itasca. On top of that haul, there were also memorable music videos from the likes of Furnsss (who nearly grabbed this post’s featured spot), Ultimate Painting, Berwanger, WL, No One Mind, Cold Cave, and Kissing Is A Crime. Full streams from Ceres and Chook Races as well as summer snacks, an incredible compilation from Deli Cat Records topped everything off with effortless panache.

Today’s feature falls to the emergent Heavy Pockets, who just provided a glimpse at their forthcoming Mopeless with the extraordinary “(Don’t Wanna Be) One of the Boys”. In less than twenty seconds, the band manages to assert a considerable amount of power and echo the very best of the enviable Salinas roster (Swearin’, Radiator Hospital, All Dogs, etc.) while establishing their own identity.

Immediate, accessible, and a perfect example of how basement pop and punk leanings can elevate each other, “(Don’t Wanna Be) One of the Boys” is a surging tide of adrenaline that’s hell-bent on washing over everything in its path. It’s dynamic and there’s a plethora of memorable hooks, which can typically be easy outs and lead to a lack of substance. That’s not the case here, as “(Don’t Wanna Be) One of the Boys” is anchored by an unflinchingly personal narrative that takes exception to infuriatingly pointless societal pressures.In just under three minutes, Heavy Pockets conjure up something that manages to be both outwardly aggressive and surprisingly intimate, making use of its cleverness in the process.

Leading the rollout campaign for the band’s forthcoming Mopeless, “(Don’t Wanna Be) One of the Boys” stands as an extremely promising look at the creative space Heavy Pockets are currently occupying. From start to finish, “(Don’t Wanna Be) One of the Boys” is a joy. Should the rest of Mopeless measure up to the track that’s leading the charge, Heavy Pockets may have a sleeper hit on their hands. All that’s left at this point is to hope that’s the case, wait patiently for the outcome, and keep hitting repeat on one of this summer’s loveliest offerings.

Listen to “(Don’t Wanna Be) One of the Boys” below and keep an eye on this site for more updates on Mopeless.

While all three dozen of those entries are worth a hefty amount of investment, it was Eluvium‘s characteristically breathtaking “Rorschach Pavan” to earn this post’s featured spot. Following on the heels of the spine-tingling “Regenerative Being“, Matthew Cooper once again demonstrates what’s made his discography one of the richest — and most celebrated — in ambient music.  “Rorschach Pavan” is one of Cooper’s finest offerings to date.

Once again, there’s an air of tranquility that permeates through “Rorschach Pavan” as well as a genuine sense of peace. Cooper’s stated that False Readings On is meant to be a meditation on cognitive dissonance and that thread reveals itself in patches throughout the course of this track but never overwhelms the proceedings, acting as a brief reprieve from the aggressive punctuation of “Regenerative Being”. Even with feedback and white noise swirling through its veins, “Rorschach Paven” registers as one of Cooper’s more calm, cerebral works.

The structure of the bulk of Eluvium’s music demands the songs to slowly unfurl, revealing themselves in layers while simultaneously adding new, overlapping themes, motifs, and instrumentation. Here, that approach hits an apex just after the 3:40 mark as a bass suddenly lifts the melody skyward in what’s one of the most beautiful sequences of music anyone’s likely to hear all year. That specific moment winds up being the definitive one for “Rorschach Pavan” as the gentle climax slowly cedes and the track begins to calmly disintegrate.

Otherworldly, intimate, and unfathomably gorgeous, “Rorschach Paven” is classic Eluvium, through and through. Beyond that, it’s one of the most awe-inspiring songs of recent memory. If the rest of False Readings On can live up to the standards set by its precedents, it’ll likely stand as one of the most beautiful records of 2016. Until then, “Rorschach Pavan” should be more than enough to tide anyone over. Fall under its spell and drift off on a sea of muted bliss.

Listen “Rorschach Pavan” below and pre-order False Readings On here.