Two months in a world where new releases never stop building can unearth a lifetime’s worth of new material. Whether it’s songs, music videos, or records, there will be more than enough material to keep anyone whose willing to invest the time occupied for weeks on end. This post will take a look back at six of the most notable clips to find release since the last regularly scheduled feature post went up, ranging from short films to compilations to animation. All of these are worth the time.

Jeff Nichols has been one of this generation’s best filmmakers since Take Shelter‘s release in 2011. Two people who have been inextricably intertwined in that development are Michael Shannon — who has delivered a number of tour de force performances for the director — and sibling Ben Nichols, who fronts Lucero and has gifted many of Jeff’s films songs for the end credits. “Long Way Back Home” is another impressive collaborative effort from all three talents, with strong ties back to Jeff’s debut feature Shotgun Stories. It’s an incredibly captivating look at a fractured relationship, invoking a sense of dread, deceit, and finality. We could all stand to learn a lot from the brothers Nichols, Shannon, and game co-stars Garrett Hedlund and Scoot McNairy.

illuminati hotties are in the throes of a breakout year, stacking up impressive pieces with ease. “Cuff” is a psychedelic stream-of-consciousness onslaught of imagery that perplexes and soothes in equal measure, centering around an anthropomorphic fish going through a daily routine. It’s a gripping piece of animation and a vivid display of imagination, the two coalescing into a memorable clip from one of 2018’s hungriest emergent acts.

Few independently-minded artists seem as deserving of a sweeping victory lap as Courtney Barnett, who has consistently done things on her own terms, whether it be launching a label to ensure total creative and artistic freedom or simply hanging on to the joy of performing in the face of growing audiences and the expectations that accompany that growth. Barnett has yet to make a disappointing record and seems to thrive in the pursuit of artistic evolution. The clip for “Charity” feels like that victory lap, blending in hangout footage with live edit clips from monstrous sold-out shows. It’s a moment that Barnett’s earned and, like everything else the songwriter’s released, immensely enjoyable.

One of the staples of Heartbreaking Bravery’s coverage since it was started five years ago has been Young Jesus, who have moved from Chicago to L.A. and worked their way up from self-releases to a deal with Saddle Creek. Their forthcoming The Whole Things Is Just There is the band’s most ambitious and fearless work to date, which will be their first true effort for their new label. In keeping with their growing sense of experimentation, the band’s releases a music video for “Saganism vs. Buddhism” that the band self-directed, going from a tongue-in-cheek intro that finds bandleader John Rossiter embracing cringe comedy to the illustrations and stop-motion work that has been a mainstay of their visual work for several years. Fascinating and teeming with confidence, “Saganism vs. Buddhism” proves the band’s not concerned about adhering to anything other than the identity they’ve carved out for themselves.

Advance Base – Your Dog

The simplistic conceit for Advanced Base’s “Your Dog” clip is rendered remarkably effective thanks to the song’s immense emotional heft. Compiled of nothing but fan-sourced photographs of people’s pets “Your Dog” becomes almost unbearably sad. A song written as a tribute to the fallout of a relationship where a partner visits more for an animal than their disappearing partner, the video manages to cut into something lasting, to devastating effect. It’s a draining experience, one that makes implicit and explicit statements about varying degrees of mortality; a reminder that everything has an expiration date. Startling and imbued with raw feeling, “Your Dog” is the kind of clip that sticks.

Dilly Dally‘s “Doom” appears to be the next installment in a series of of music videos that double as a direct commentary on Dilly Dally’s absence and rebirth. The band’s already made varying statements about how they collectively weathered a few trips through personal hell while facing down various addictions and how those experiences nearly buried the band. The clip for “I Feel Free” found bandleader Katie Monk’s literally unearthing the corpses of the other members and urging them to come back to life while “Doom” posits Monks as a torch-bearing leader guiding them to a spiritual ascension. Full of vivid imagery, soft hues, and more than a few nods to witchcraft, “Doom” makes it abundantly clear that Dilly Dally has returned- and that they’re intent on a reckoning. 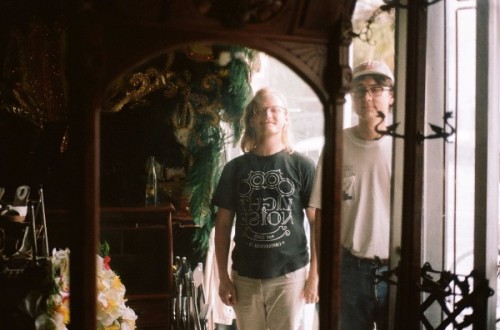 The last three weeks of March brought a lot of excellent tracks into the world but the 10 below managed to separate themselves as genuine standouts. A trio of acts that appeared in the last “Best Of” featured segment strike again while the rest of the acts here are either old favorites or making first-time appearances. From scintillating noise-punk to gentle washes of ambient folk, there’s a lot here to explore. Find a new favorite song below.

1. Spring Onion – I Did My Taxes For Free Online

Sometimes all an artist needs is one song to snag an audience and that may very well be the case with Spring Onion’s “I Did My Taxes For Free Online”, which boasts some of the hallmarks that have made acts like Told Slant, Radiator Hospital, and LVL UP so beloved. Immensely relatable, beautifully constructed, and coming from an unsparing, honest place, “I Did My Taxes For Free Online” is a strong early testament to an emergent talent worth remembering.

illuminati hotties are building up an insane amount of momentum on their way to the release of their debut album, Kiss Yr Frenemies. The band’s already been featured in the monthly best-of columns once this year and they’re doubling up here with the 1-2 combo of the irresistible hooks of “Paying Off The Happiness” and the introspective reckoning of “Cuff”. Both songs continue to demonstrate the band’s strengths and, taken with “(You’re Better) Than Ever” suggests they might not have any weaknesses.

A characteristically melancholic piece of muted, driving basement pop, bed.‘s “Replay” is imbued with the kind of considered energy that’s gained the band a small but fiercely loyal following. Measured and slightly unpredictable, “Replay” toys with extremes its narrative and its composition, allowing the two to play off each other to great effect. It’s a standout piece in what’s already a stellar discography and suggests the band’s peak is either arriving or already here. No complaints either way.

“Small Talk”, the latest from Maria Kelly is a masterclass in creating gentle tension and magnetic atmosphere. Smart production, tender composition, and an effectively wistful delivery combine into something intangible, creating something that pulls and mesmerizes in equal measure. It’s a gorgeous piece of ambient folk, weaving a spell that all but submerges the listener into a separate, empathetic world.

Easily the fiercest song in this 10 track list, Closet Goth’s “Touch Myself” makes no bones about being aggressive, exploding out of the gate and building speed as it goes, not content unless everything in its path is completely demolished. References to Silver Jews are nearly buried in the noise-centric production, intentionally drowning out — and simultaneously enhancing — some intense caterwauling. Vicious, ragged, and uncompromising, “Touch Myself” leaves wreckage in its wake as it winds to a fun, unexpected close.

The second artist on this list to make a consecutive appearance in the monthly “best of” columns, Fenne Lily‘s “Car Park” is another strong example of the breadth of the songwriter’s scope. In slowing down the tempo and widening the lens, Fenne Lily taps into something that skews closer to world-building than atmosphere construction. It’s a beautiful piece of modern Americana that seems to indicate Lily’s bag of tricks might be more expansive than most know.

“Rascal”, the latest track from Annabel Allum is a perfect example of how a minimal setup can lead to enormous moments. Borrowing cues from slacker punk, folk, Americana, post-rock, and ambient, Annabel Allum wind up with an enticing piece of genre-bending excellence. Impassioned performances at every slot and a meticulously constructed arrangement congeal into one of the more breathtaking moments of 2018’s first quarter.

9. Say Sue Me – After Falling Asleep

The third and final artist to appear in consecutive monthly Best Of’s Say Sue Me follow their initial outing with yet another strong track from their excellent forthcoming Where We Were Together. “After Falling Asleep”, the band’s newest offering, opens with an almost intensely quiet moment before blooming into a seductive burst of indie pop. Soft edges and a wide-eyed approach has been a pattern that’s served Say Sue Me well in the past and it continues to do so on the lovely “After Falling Asleep”, one of their most irresistible tracks to date.

Last year, this site had the privilege of premiering Diamond Jubilee, an extraordinary EP from site favorites Bent Denim. Now, the act’s returned with “Chasing Catherine”, another show-stopping bit of softly hued ambient pop that more than justifies its place in their increasingly impressive discography. Bent Denim can conjure up a very specific type of mood better than just about any of their contemporaries and it shows in “Chasing Catherine”, a short slow-burner that immediately invokes the feeling of a calm summer night and keeps that fire flickering until its hushed, tender close.