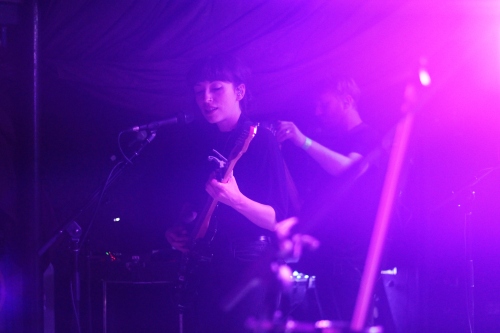 Shortly after Mike Krol’s set finished, I received word that Daughter were playing a secret, unannounced-to-the-public 1 AM set and immediately made sure I found an attendance spot. The band’s been one I’ve held in high esteem and one of their quietest performances has stuck with me ever since my initial exposure to it several years ago. Very shortly into the set, it was made clear why it was kept under wraps: this was a show that the band wanted to make memorable for everyone in attendance- and it was also the show where they announced their forthcoming album, Not To Disappear.

Gracefully moving through a set that relied heavy on material from Youth but still made room for the new material, the band found themselves in fine form and silenced a sold-out room, who all grappled with various stages of awe. No matter what mode the band is in, whether they’re idling at a slow tempo or switching over to hard-hitting, they exude an impossible amount of grace. As the members trade off instruments (or trade endearing witticisms), they never seem anything less than serene.

Occasionally that calmness translates over to their music and creates an arresting, engrossing atmosphere. That intersection was never more evident than it was when the quartet unveiled the live premiere of their new single, “Doing The Right Thing” (which they’ve affectionately shorthanded to “Detroit” for the way the acronym appears on their set lists). Now that the song has a powerful video (one of the year’s finest) as an accompaniment, this memory rings even more fiercely but as the song’s closing lines were drawn out in a whisper, there was a silence so complete that thinking about it now, weeks after the fact, is enough to induce chills.

Everything in their set that had come before that moment and everything that will always have that singular performance as a reference point; it was that strong of a moment. As their set wound to a close, the band proceeded with a characteristic amount of elegance, never striking a false note. As the skies opened up outside and loosed a torrential downpour, their crowd filed out into the late-night storm in states of quiet reverie. In passing, I overheard a hushed “wow” that was immediately met with a silent nod, an exchange that acted as the perfect summation of a genuinely memorable evening.

Watch the band perform the title track from Youth below and explore a photo gallery of the show here.

Last night Palisades played host to a bill that guaranteed the venue would sell out well before doors, so expectations for the evening were considerably higher than usual. The night was headlined by Mitski (who has earned her fair share of words on this site) and made room for other site favorites like Brooklyn upstarts Normal Person and The Epoch favorites Eskimeaux. Throw in Elvis Depressedly (who now comfortably reside on Run For Cover’s increasingly fascinating roster) and any promotion outside of the show announcement practically becomes unnecessary; this one sold on its own.

Normal Person played first to a small but appreciative audience (it would progressively swell in size until the room was finally at capacity for Mitski) and brought their all. Their sole EP, the fantastic #0001, has been floating around online in some form or another for years. Recently, the tape was granted a physical release (a copy can- and should- be ordered from It Takes Time here) and it was the band’s first show to promote the tape. As is always the case with the various LVL UP side projects, Normal Person is a band that comes stacked with intimidatingly talented musicians. I only managed to catch the last stretch of their set but it was incredible enough to inspire the thought that it’ll only be a matter of time before they’re headlining these kinds of shows.

Next up was Eskimeaux, a band that’s part of the prolific Epoch collective and riding high on a wave of national acclaim for O.K., one of 2015’s best records. Unsurprisingly, the majority of their set pulled songs from that record and were played with the characteristic passion that The Epoch has become renowned for exhibiting. Nearly every song came laced with an approach that alternated between delicate and furious, spurring feelings of empathy and heartbreak in the process. It was abundantly clear that these songs carried significant meaning for guitarist/vocalist Gabrielle Smith, who delivered them with an uninhibited grace, leading her incredible band (Felix Walworth’s jaw-dropping drumming is worth singling out) through the emotional fraught terrain and- ultimately- delivering one of the best sets of the year.

Following something like Eskimeaux almost requires a certain wildness and that mania was something that Elvis Depressedly was more than happy to supply. My friend and fellow writer Sasha Geffen once said that Elvis Depressedly were “a band that records in lowercase but plays in all caps.” It’s a quote that, for whatever reason, has stuck with me over the years. I was anxious to find out what she meant and wasn’t disappointed to see the band fully embrace a much more chaotic and maximized version of themselves. They’ve assembled a strong band for this tour, which includes Greg Rutkin of LVL UP (and openers Normal Person) behind the kit. Significantly punchier than they are on record, Elvis Depressedly wound up creating a perfect bridge between Eskimeaux and Mitski with a career-spanning set largely mid-tempo numbers that had some psych flourishes and played into vocalist Mat Cothran’s outsize persona.

At this point, Mitski Miyawaki’s project has more than earned its headliner status and it was heartening to look out into the audience to see a diverse crowd of people that was dominated by a front section that skewed more towards the under 21 bracket (Mitski’s guitarist, Callan Dwan, would later reveal to me that she was very grateful for both the venue and the crowd’s size). Towards the very start of her set, Mitski addressed the crowd, thanking them for their support and encouraging the historically marginalized communities to be proud of their roots and “take up as much space as you can”, with a disarming sincerity that’s seen far too infrequently. It was a moving plea that was rooted in honesty, a dynamic that’s been translated effortlessly into her music (which is one of the many reasons behind Bury Me at Makeout Creek almost topping this site’s Best Albums of 2014 list) and is fully ingrained in her demeanor.

With ex-Diarrhea Planet drummer Casey Weissbuch (who’s also the mastermind of Infinity Cat‘s extraordinary cassette series) anchoring the trio, the band dove headfirst into a memorable set that wound up recapturing a lot of the magic of the last Mitski set to get coverage here (no small feat) while supplementing it with new intricacies. Deceptively nuanced and- a recurring theme throughout the night- unerringly heartfelt, it touched on various points throughout the songwriter’s discography, while- understandably- leaning heavily on the Bury Me At Makeout Creek material. If Mitski was baring her soul on the Palisades stage, the audience was reciprocating that generosity with extremely vocal support between songs.

At one point, in one of the evening’s most genuine and communal moments, Miyawaki ran backstage to collect the bottled water on hand for the artists and passed it out to the audience to help them cope with the uncomfortable humidity that only a small space packed with bodies on a warm day can bring. It was one in a series of moments with the band and the audience playing off of each other, which was itself a slight reflection of how well the band played off of each other during a very affirming set. Following the pained howling that closes out “Drunk Walk Home”, the band left the stage leaving its principle voice alone with the spotlight. Two tender songs later, the set was wrapped, and the audience was screaming for an encore that never came. Even if it had, it probably still wouldn’t have satiated the audience’s desires- and, really- why bother tampering with a perfect closing note?

A gallery of photos from the show can be found here and a video containing some of each act’s strongest highlight can be found underneath the gallery. 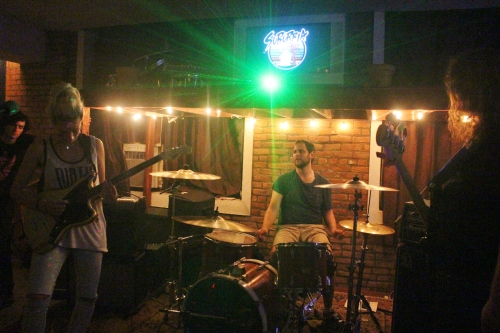 One of the best things about a place like Brooklyn is that if you wind up having to miss out on one show, there’s another one happening just a short distance away that could very easily have or exceed the impact of the show you missed. While my initial plan to see Rainer Maria fell through, it was heartbreaking for a moment- until I was reminded that PWR BTTM and Slothrust were headlining a nearby show. Anyone that’s come across this site lately likely already knows exactly how this place feels about PWR BTTM and eagle-eyed observers with an astounding memory capacity may recall that Slothrust got shortlisted in our round-up of 2014’s best releases for the extraordinary Of Course You Do. Having both acts on the same bill made for an easy decision, despite quite a bit of competition.

Lowlives and Nonsense opened the show and while my late arrival meant having to miss the former entirely, I did manage to catch the end of the latter’s set. Suburbia- the venue that hosted the show- proved to be a better fit for the band than Aviv, where they’d recently played as part of the collaborative Northside showcase that was put on by Ipsum, Gimme Tinnitus, and Exploding in Sound. Playing to an appreciative crowd, Nonsense played off of each other quite well and se the stage nicely for PWR BTTM. Once again, PWR BTTM proved to be an absolute force- even in the face of lost pedals and a string breaking, the charismatic duo never had a moment that was anything less than obscenely compelling.  The band’s putting out Ugly Cherries– one of the year’s best records- in September and their set previewed a lot of material from that release while also still incorporating long-standing staples like the anthemic “Hold Yer Tongue”. As usual, their set was a convincing (and probably even inspiring) demonstration of energy, resilience, mischief, and enviable skill. In short; it was just about perfect.

Slothrust, a band that I’d previously only ever maintained a glancing familiarity with, followed PWR BTTM with a powerhouse set that more than justified their top bill placement. From the onset, it was evident that the band’s built up an extremely loyal and devoted fan base. By the end of their set, it was easy to see what inspired that devotion. Both on record and live, Slothrust are operating on a very different level than just about any band running their circuit(s). Combining elements of grunge, folk, Americana, punk, powerpop, and even prog into something that feels remarkably singular, they’ve crafted an identity that manages to both be accessible and refreshingly unique.

With Leah Wallbaum’s biting- and frequently deeply personal- lyrics leading the band’s frenzied charges in their most chaotic moments (and anchoring the band when they exercise their restraint), Slothrust very quickly transform into a band that people not only strongly identify with but want to see succeed. Even at their most irreverent, there’s a level of conviction that translates so easily for Slothrust that it’s nearly impossible not to be mesmerized by the music they’re making/playing. That aspect of the band held especially true for the 1-2 punch of a genuinely stunning Britney Spears cover (“…Baby One More Time)” and “Crockpot“, their extraordinary closing number and current career highlight. In those climactic moments, the band managed to showcase nearly all of their varying draws and limitless appeal, ultimately providing an emphatic endpoint to an exhilarating set- and ensuring that this site will be covering them a lot more closely in the following months.

A photo gallery of PWR BTTM and Slothrust’s sets can be seen here and a video containing a large portion of both bands’ sets can be found below. Enjoy.