As has been mentioned multiple times over, this site saw a recent shift from standard coverage to specialty coverage thanks to a move. In the few weeks that have passed in that time, a slew of exciting new releases made their way out into the world. One of the finest- and, frankly, most overlooked- was Sweet John Bloom’s fiery Weird Prayer. That record will be the focus of this piece, while a list of 50 excellent full streams to have recently appeared will be included beneath the embedded bandcamp player. Before immediately going there, though, let’s focus on the matter at hand: Sweet John Bloom’s full-length debut.

Formed out of the ashes of several other bands (including Four Eyes, who released one of the best 7″ records in recent memory with Towards the End of Cosmic Loneliness), Sweet John Bloom already had a fairly impressive pedigree out of the gate. It’s not surprising that the band managed to click as tightly as they have, especially considering their respective former bands had all established a familiarity by virtue of shared spaces (bills, scenes, etc.). Even with all of that taken into account, Weird Prayer‘s pure strength still manages to surpass expectations.

A collection of 15 dirtied up, punk-leaning basement pop songs, the record not only succeeds in effortlessly conveying the band’s identity but in coming off as a genuine record; something that’s meant to be heard in full. Naturally sequenced and expertly paced, it’s a considerable achievement for a first at-bat operating with this medium as a collective unit. Each section of Weird Prayer comes off as considered as it does impassioned, rendering the whole thing an invigorating shot of adrenaline. Vocal leads are traded with ease, there’s a killer melody buried in just about every passage, and the flawless production makes sure to include enough bursts of weirdness- like the absolutely stunning outro to “Night Thing”- to keep the whole thing zipping along at a startling clip.

For as willfully rough as Weird Prayer sounds, it’s also a record that’s partially defined by finesse. Deceptively elegant guitar figures play with the limits of restraint even as they’re pushed to the red. The rhythm section work always serves a purpose beyond just simply being a base and the lyricism, while occasionally buried with the vocals in the mix, is frequently poignant. Sweet John Bloom also manage to find as much success experimenting with their more gentle sensibilities as they do when they give in to their desire to be abrasive.

“Blood Moon” sees the band finding the perfect balance between the gentle/abrasive dichotomy and, in the context of the record, the song feels even livelier and massive than it did as a standalone single. It’s one of several songs on the record that go beyond anthemic to the realms of catharsis without ever succumbing to over-simplification. It’s part of why the record never loses an unfailing sense of urgency that goes well beyond most of the songs’ inherent immediacy, which sets up a tall order for Weird Prayer‘s final stretch.

In most cases where an album’s almost exclusively built on raucous barn-burners, the weight eventually builds and the load becomes unsustainable; there’s a reason why rollercoasters don’t extend for hours and why successful action films need exposition. Weird Prayer deals nicely with this by offering a gradual come-down by easing off the gas pedal and utilizing a tempo that creeps in a little under the established average for most of its closing numbers. Even then, Sweet John Bloom don’t cede their penchant for a confrontational aesthetic; the 1-2 punch of “Death; and Everything’s Paid For” and “Trust  Me” feels particularly vital and bristles with a world-conquering energy. Fittingly, “Aging In Place”- the first song to be shared from Weird Prayer– brings everything home in a finale that’s both familiar and intensely rousing; an exhilarating end-cap to one of the year’s finest records.

Pick up Weird Prayer from Tiny Engines here and listen to it by clicking play below. Underneath the bandcamp player, browse 50 other great recent full streams.

There are few things more exciting to me than coming across a band worth getting excited about- and the latest addition to that list is Pleistocene, whose “Liberteen” is nothing short of a sugar high. Before getting around to that, though, just like the posts leading up to this one, there will be ten songs that get mentioned based on their strength. 2015 has supplied no shortage of outstanding music in its first four months and these have all surfaces in the past few weeks. Included in those ranks were Glockabelle’s typically insane “Wolf BBQ“, FFS’ dancefloor-ready “Johnny Delusional“, Rose Windows’ winningly complex “Strip Mall Babylon“, and a new solo song from one of the most brilliant songwriters I’ve ever encountered, Colin Bares (of The Coral Riffs, Good Grief, and The Cost of Living), entitled “Infinite Celebrity“. Additionally, there was Western Plaza’s carefree basement pop tune “Thrift Store Girl“, Turnover’s light, charming “Humming“, and Prurient’s terrifyingly brilliant “Greenpoint“. Piling things on were Blur’s freshly rejuvenated “My Terracotta Heart“, O-Face’s sunny indie pop number “Yolanda“, and site favorite Courtney Barnett’s beautiful cover of John Cale’s “Close Watch“. While each and every single one of those is a title worth purchasing, it’s Pleistocene‘s “Liberteen” that earned this post’s feature.

Pleistocene have been a band for a while and have somehow evaded my detection in their time of existence. I’m already attempting to make up for lost time but, even more than that, looking forward to what the band’s got lined up for the future. “Liberteen” is the first glimpse of the band’s forthcoming Space Trap EP (due out via Cherish Records) and it lands every blow it throws. A series of sweet grace notes, it’s another song that deftly combines some subtle twee elements with powerpop and fuzzed-out punk. In short, it’s just about perfect. Melodic beyond reason and effortlessly light without ever seeming disposable, “Liberteen” is the perfect soundtrack for this spring and that distinction will likely extend to summer. Insistent, beautiful, and immensely likable, Pleistocene have thrown their stake into a niche area that’s directly in line with what this site loves to cover. If the rest of Space Trap follows suit, it may just become one of the year’s more memorable releases.

Listen to “Liberteen” below and keep an eye on this site for more coverage of both Space Trap and Pleistocene.

Let’s start this off by getting unconventional: Green Dreams were the first band to send this site music for review/feature consideration. After being told to keep in touch following that initial exchange, they lived up to their promise of doing so. That led to subsequent coverage of a music video, an incendiary song, and that song’s inclusion on an early best-of playlist. Now, the 7″ that the song “Eye Contact” had been teased from is available for streaming in full- and it sees the band absolutely annihilating their previous high-water mark.

Each of the four tracks on Rich Man/Poor Man feature the band playing with a renewed sense of vigor, a tighter focus, and indulging their heavier hardcore tendencies. With pinpoint precision, the band bludgeons the unwitting into submission by virtue of the high-impact punishment they unleash here. From the opening duo of songs that gives this 7″ its name, the level of confidence on display is almost staggering- but that confidence is earned in full.  “Rich Man” sets the bar high with a furious hybrid of sludge, hardcore, and post-punk. Guitarist and vocalist Jesse Amesmith has never been in finer form, spitting each new lyric out with an astonishing sense of purpose. Equally impressive is the furious rhythm section interplay between drummer Trevor Amesmith and bassist Ben Kruger- something that comes into even sharper focus during the explosive final minute of “Poor Man”.

While the only essential additional thing to be said about Rich Man/Poor Man‘s excellent closing track is that it provides a great end cap to an extraordinary release, it’s probably worth noting that it’s still among the best songs to have been released this year. Even with that being the case, it’s certainly possible that one of the small handful of songs to top it is “Country Mouse”, the one that immediately precedes it. More than any other song on Rich Man/Poor Man “Country Mouse” radiates Green Dreams’ newly sharpened fierceness. Blasts of noise-punk that threaten to verge into the realm of total chaos and tear the song into multiple shreds keep intruding in on the verse while the chorus sounds like it’s fighting to hold itself together. Shards of feedback lash out at the high-intensity guitarwork and the whole thing winds up being an absolutely essential listen (a major tip of the hat is also due to Shaun Sutkus, who worked his usual recording room magic to help give this a subtle, extra kick).

All suspicions of this 7″ being a must-own have been confirmed. What will easily stand as one of 2014’s best at the end of the year is now available for purchase through Cherish Records or Green Dreams’ bandcamp. Don’t miss out on this. Grab a copy while they’re still available.

Listen to Rich Man/Poor Man below and pick it up by following the hyperlink above. 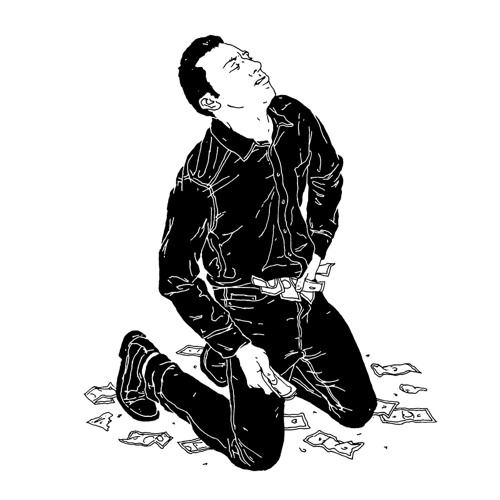 It hasn’t been all that long since Green Dreams’ last appearance on this site but the band appears to be moving at a very quick clip these days. The Rochester-based band will be following up last year’s Sweats with an upcoming 7″ that’s entitled Rich Man/Poor Man and have just released “Eye Contact”  ahead of its release. While Sweats was certainly an impressive release, “Eye Contact” finds the band evolving and refining their sound in thrilling, immediate ways. There’s a newfound rawness and aggression to “Eye Contact” that more fully embraces Green Dreams’ hardcore tendencies. This is fierce, undeniable music. Jesse Armes’ vocals have never sounded more committed and neither has the music surrounding them. It’s an absolute must-listen and points towards Rich Man/Poor Man being a must-own. Listen to “Eye Contact” below and keep an eye out for the band’s upcoming tour with Perfect Pussy and Yamatanka//Sonic Titan.