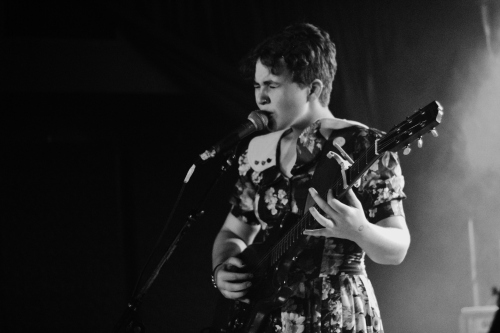 Girlpool‘s a name that’s been printed on this site with alarming frequency and now the duo’s been actively pursuing solo routes in addition to maintaining the vehicle that brought them national attention. As great as all of the material that Harmony Tividad and Cleo Tucker have released, both together and on their own, Tucker’s latest, “Call It Tie”, feels genuinely different. A standalone single quietly uploaded to Tucker’s personal bandcamp, the song abandons the minimalist constraints that both Tucker and Tividad have made trademark approaches in favor of a sound that skews closer to Guided By Voices at their most charmingly lo-fi.

There’s an earthly magnetism that propels the surprisingly gnarled “Call It Tie” forward, creating an effect that’s as fascinating as it is breathtaking. It’s an important evolution for one of today’s finest songwriters, demonstrating an aspect of Tucker that was only occasionally allowed to peek through Girlpool’s best work. Dark, eerie, and incredibly downtrodden, “Call It Tie” is a direct pathway to a compellingly fractured psyche, a common trait among great artists. There’s not a moment here, from the hushed vocal delivery to the haunted extended outro, that doesn’t coax out maximum impact. It’s a startling work and proves Tucker’s an artist worth following to the end.

Listen to “Call It Tie” below and download it here.