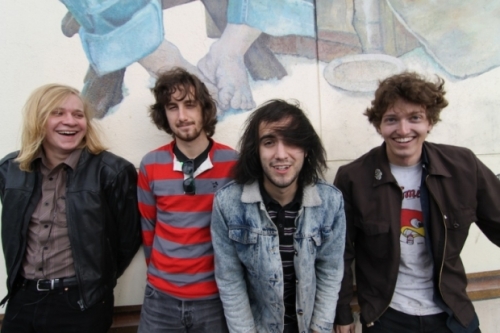 In the closing moments of the week, there were great new music videos to emerge from the camps of Erin Tobey, Big Eyes, Death Grips, Sewage Farm, And The Kids, and The Holy Circle. As good as those all were — and they were quite good — they simply couldn’t match the allure of personal history attached to this post’s featured clip. The very first Heartbreaking Bravery post centered on an Audacity music video. Now, more than 900 posts and nearly three years later, the band’s offered up another strong clip for a Hyper Vessels highlight.

In the time that this site’s been running, I’ve been afforded several unique opportunities. One of those was working doors for one of Brooklyn’s finest venues, Baby’s All Right, which is the setting for Audacity’s latest clip, “Not Like You”, giving the whole affair an oddly meaningful bent. Baby’s iconic backdrop always lent the venue a uniquely cinematic appeal that often seemed to energize the acts on stage and this Brendan McKnight-directed clip utilizes that trait to its advantage.

Audacity are a band that’s thrived on conjuring up excessive amounts of energy since their earliest releases and have honed that particular skill set into something resembling concentrated weaponry. “Not Like You” is a surging track and the editing for its accompanying visual treatment matches that velocity to perfection, creating a high-impact punch that leaves an intentional mark.

Simple, effective, and embracing an honest sense of genuine fun (something that’s been noticeably absent from the majority of recent releases), “Not Like You” distills the band into what may prove to be a definitive piece. Manic, sharp, and surprisingly forceful, “Not Like You” is practically a victory lap for a band that’s been creating the type of art this site quite literally used as a foundation. Taking all of that into account, it’s nearly impossible to not revel in the sheer amount of joy on display.

Watch “Not Like You” below and pick up Hyper Vessels here.