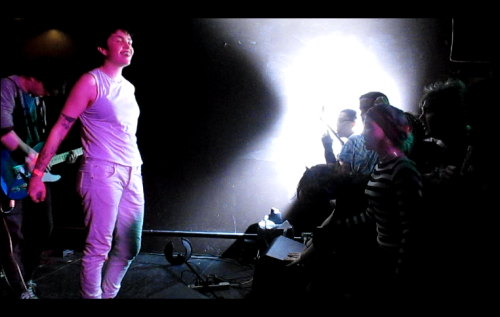 There are times when I’ve broken one of Heartbreaking Bravery’s most defining tenets (no self-identifiers: the music is more important than the reviewer) in an effort to illuminate something. This will be one of those times for several reasons: 1) This post may mark the last time a point n’ shoot is used for content on Heartbreaking Bravery. 2) This is the first time, and certainly not the last time, a (new) self-shot full set will be appearing on this site. 3) Perfect Pussy have already qualified as exempt from this rule for reasons explained here (and then again here). 4) By posting this, I’m hoping to stabilize a bridge between a focus on music and a focus on film (look for more on that later). 5) It’s the only way I could think of delivering these points as honestly as possible. 6) I firmly believe in a support structure between DIY publications and fully intend on this being the first part of a collaboration piece.

With all of that out of the way, there’s only a few things left to say before the video(s) themselves: Yes, this is a severely blown out recording with some seriously damaged audio quality. Yes, there is an unexpected break that results in a twenty second delay between the monstrous second half of “Interference Fits”. Yes, there are times where the band goes completely out of frame. Yes, that was because I kept getting hit hard enough by the wildly enthusiastic crowd around me to be literally upended into the stage multiple times over (and, yes, I loved every second of it, bloodied up leg, beer-soaked jacket, bruised hips and all). Yes, this isn’t the greatest live presentation in the world- far from it, in fact- and yes, this is primarily being posted because it’s something I fiercely love (and has people that I love dearly in it). No, that doesn’t affect my judgment at all- these were all instances of friendships born out of love for their art and through mutual understanding/support. Yes, there will be a review of this entire show (along with more photographs)- but not on Heartbreaking Bravery (more to come on that later). Yes, I really am posting this right after the Minneapolis review– and yes, all of this can be seen in two parts below.