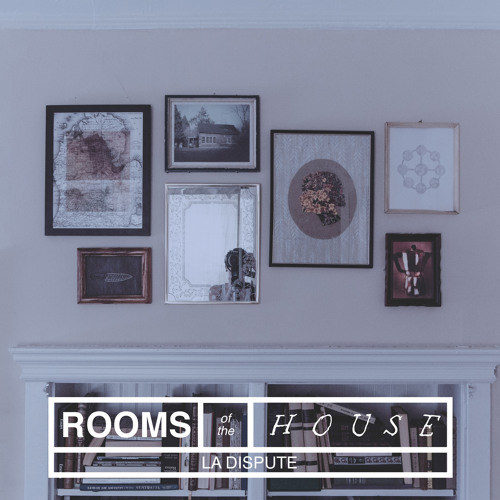 La Dispute always seem to ignite genre arguments, which is a shame because really (while every side does seem to have some merit) the bottom line often gets overshadowed. That bottom line? They’re a band who have staked out their position not by having a hand in a myriad of styles but by making legitimately great music. Their upcoming record, Rooms of the House (due out 3/18 via Staple Records), is even more definitive proof of this. There are very few bands playing with structure- and narrative structure- quite like La Dispute. All of their past trademarks are more prominent than they’ve ever been on Rooms of the House. From the deeply concerned and fiercely empathetic delivery concerning the traits of their songs protagonists to the stealth-morphing of time signatures and tempos, Rooms of the House is as unmistakenly La Dispute as possible.

Opener “HUDSONVILLE, MI 1956” wastes no time in laying the record’s groundwork: the first lines are as follows- “There are bridges over rivers, there are moments of collapse. There are drivers with their feet on the glass; you can kick but you can’t get out. There is history in the rooms of the house.” Immediately, they’ve presented a subverted thesis that they don’t reveal the full extent of until it becomes apparent. Using a house and its objects as the source material is an inspired idea and in the right hands (La Dispute’s, certainly) yields extraordinary results. Projecting history into the mundane, “HUDSONVILLE” goes from that brief introduction to an absolutely harrowing tale of separation during a spell of severe storms. The phones are cut, the radio’s are all yelling out warnings, and lovers try to focus on anything but the fact that those closest to them may be dead. As first songs go, it’s among the best of the past few years. Not a bad start.

Coexisting with the narratives is the band’s music itself, all bottled-up fury that tends to operate on a tension-explosion dynamic, never losing an ounce of its verve. There are very few moments throughout Rooms of the House where the band scales back its intensity- whether it be the quiet kind or full-throttle. One of those moments that takes solace in relative relaxation (at least for a while) is the record’s third track “Woman (in mirror)”, which (at least in terms of instrumental arrangement) strongly resembles In Rainbows. It winds up being a strangely good look for La Dispute, who prove definitively that they can do wonders with a laid back, clean, groove-heavy track. As always, Jordan Dreyer’s lyrics are beyond exceptional (this is the guy that gave us King Park, after all) and he continues to be a viable candidate for one of this generation’s best songwriters. “Woman (reading)”, at least until it descends into controlled chaos, and “Objects in Space” also reside snugly with “Woman (in mirror)” and its chilled-out territory. Each offering up a fair few surprises and winding up with equal worth.

As nice as it is to hear La Dispute so fully embrace the quieter nature of their identity, the band still thrives on bursts of violence. It’s that sense of genuine danger that made “For Mayor In Splitsville” an early standout (with an incredible video to match), with its emotional turbulence maximized. Nothing is held back, everything’s a travesty, and that’s frustrating as hell. That “Splitsville” has characters who are treated as equally as the ones in “HUDSONVILLE” may strike some sensitive people as callous but it, once again, points to Dreyer’s strengths as a storyteller. While nearly everyone in Rooms of the House is dragged through hell and back, they’re all given equal care and consideration. There’s beauty in the mundane, damaged or not, and a good story’s always worth telling. Every good story also has a very present instability and makes room for uncertainty as an important factor. La Dispute tend to live in those margins, not caring as much about the resolve as they do about the journey. It’s a trait that plays directly into what makes Rooms of the House so successful as a collection of stories and what ties them all together. The house metaphor is used heavily throughout the record but really it’s strongest unifying factor is the open fears of the protagonists in the heart of their respective stories.

When Rooms of the House has exhausted all of its punches and winds down with “Objects In Space”, songs like the absolutely furious “Stay Happy There” are still resonating; their shots buried into the fabric of the story as a whole. Everything splits apart and crumbles, buckling under the weight of its volatile nature. Depending on how empathetic the listener tends to be, they’ll either be drained or riveted- often both. This is the kind of work that merits a pause once it’s run through, though. It’s not a light piece and it requires a fair amount of investment. Fortunately, that investment gets rewarded tenfold and the listener’s not only left with an outstanding record but an incredibly memorable story and frighteningly immersive experience. While La Dispute certainly weren’t making anything that wasn’t worth listening to before this, with Rooms of the House they’ve managed to top themselves. It’s an incredible record and will very likely experience a strong amount of support come December. Until then, all that’s left to do is get lost in its stories.

Watch the video for “For Mayor In Splitsville” below and stream the whole record over at the band’s soundcloud.

5 Comments to “La Dispute – Rooms of the House (Album Review)”