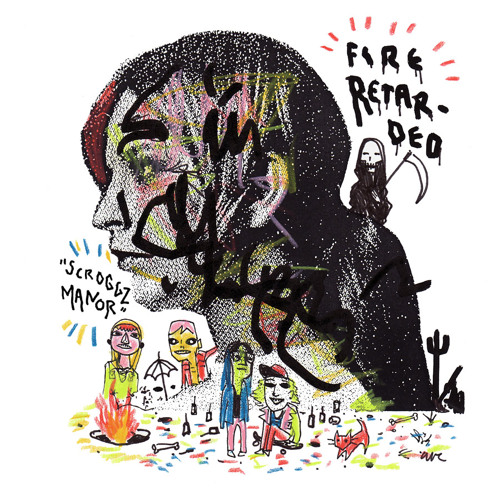 After yesterday’s mention of Fire Retarded’s impending LP release, the fact that the band started streaming the first song from that LP earlier this week seemed too appropriate of an opportunity to pass up for coverage. Again, this is a Madison-based band that features Bobby Hussy (of The Hussy) that shares a kindred spirit with his other project. Fire Retarded’s a touch more, well, fiery, though; “Meat Stairs” is a balls-out blast of manic energy. Propelled by caterwauling screeches and off-the-rails riffing, “Meat Stairs” displays many of the band’s most prominent traits, each of which is emphasized greatly by the lo-fi leaning production. “Meat Stairs” is melodic as hell and packs more than enough reasons to get excited for the release of Scroog’z Manor (that’s the album art up above).

If this just isn’t enough Fire Retarded and more of their music is a necessity, make sure to catch them on one of their upcoming tour dates. This band’s already a don’t-miss live prospect and Scroog’z Manor carries a pedigree that could make it an easy qualifier for year-end lists. Don’t let this one out of sight.